Zunari, also known as the Shop Guru, is a character from The Legend of Zelda: The Wind Waker. A short man with a mustache and a noticeable pink nose, Zunari wears a fur-lined blue winter coat with pink cuffs and a ring on one hand. It is stated that he got the coat from his mother and never takes it off, even during the hottest days. One thing that distinguishes him from most other Legend of Zelda characters is the fact that his exact age is given: at the time of the game, Zunari is 39 years old, about to turn 40.

Zunari is an accomplished entrepreneur and the shopkeeper on Windfall Island. He sells decorative items that are sent to him via a Merchant's Oath during the day and holds the Windfall Auction in the Hall of Wealth every night. He plays a small role in the main quest of the game, as he sells Link a sail that he brought along with him from a distant land for 80 Rupees.

Zunari is a relatively new resident of Windfall Island during the events of The Wind Waker. He sailed to the Great Sea from a cold, distant land in hopes to establishing a prospering business in Windfall Island. To this end, he sets up the Windfall Island Shop and offers to sell Link the Sail from the boat that carried him to Windfall Island. The Sail is a perfect fit for Link's boat and companion, the King of Red Lions. With this money, Zunari opens a small stall in Windfall Island, where he sells decorative items.

After obtaining the Delivery Bag, Link can partake in a small side quest that involves Zunari. Zunari asks Link to contact several Traveling Merchants found all over the Great Sea in order to strike a deal between the two parties to trade one another's goods, a deal known as a Merchant's Oath. These items can in turn be used to decorate Joy Pedestals on Windfall Island for the Joyous Volunteer Association. After three successful trades, Link is given the Magic Armor, a purple jewel that protects the user from damage at the expense of magic power. If Link continues to make trades until he has successfully traded for every item the Windfall Island Shop can carry, Zunari gives Link the Shop Guru Statue, a golden effigy that bears the likeness of Zunari.

Upon rescuing the girls from the Forsaken Fortress, one of them, the formerly rich Mila, works for Zunari during the day, as her father spent all his money trying to save her. At night, she makes attempts to break into his safe until Link confronts her and convinces her to change her ways.

In The Wind Waker HD remake, before he sells Link the sail, Zunari will ask Link to rescue Tingle from Windfall Town Jail as he reveals that Tingle had originally traveled with him to Windfall, but was arrested upon reaching the island for his suspicious looks. Freeing Tingle causes Zunari to lower the price of the Sail from 200 Rupees to only 80 Rupees, as in the original game.

As part of the Master Wind Waker DLC, Zunari's parka appears as an Fairy Clothing top for Companion Fairies called the Merchant Coat. 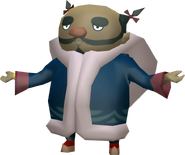 Render of the Zunari Figurine from The Wind Waker
Add a photo to this gallery
Retrieved from "https://zelda.fandom.com/wiki/Zunari?oldid=540685"
Community content is available under CC-BY-SA unless otherwise noted.