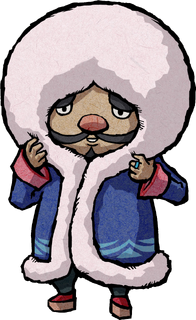 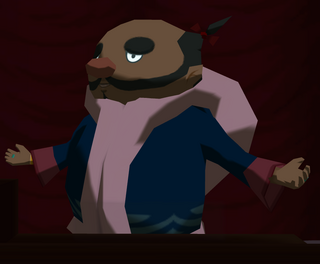 Zunari is a character in The Wind Waker.[2]

Zunari used to live on a cold island, but he eventually moved to Windfall Island,[3] where he set up a stall in the hopes of running a prosperous business.[4] At first, he lacks the necessary funds, with his only stocked item being the Sail that he used to navigate from his homeland to Windfall.[5] However, when Link helps him by purchasing his Sail,[6] he begins to try and sell things for an organization whose goal is putting flowers all over the town. Zunari is also a member of the Joyous Volunteer Association.

Zunari's only possession is the coat that he always wears, crafted by his mother.[7] Nonetheless, his safe may contain something of value, as Mila tries to break into it at night time. During the Island Trading Sequence, if Link makes a Merchant's Oath with the three Goron Wandering Merchants situated on Mother & Child Isles, Greatfish Isle, and Bomb Island, Zunari will gift him with the Magic Armor. Zunari can also be found running the nightly Windfall Auction at the Auction House.

In The Wind Waker HD, when first spoken to, Zunari will request that Link free Tingle from the Town Jail before he will sell him the Sail. He claims that Tingle had originally traveled with him to Windfall but was arrested upon reaching the island for his suspicious looks.[8] Freeing Tingle causes Zunari to lower the price of the Sail from the previously considered 200 Rupees to only 80 Rupees,[9] as in the original game.