"An amulet of the Zora people, imbued with the power of water. Each Combo Attack fills a water gauge. Press the Strong Attack button to expend water for a powerful distance attack!"
— In-game description

Zora Scale is the default weapon moveset used by Princess Ruto in Hyrule Warriors and Hyrule Warriors Legends. It is described as an amulet of the Zora people, imbued with the power of water and as a result, it has a Water Elemental Attribute. Each combo attack fills the Water Gauge. By using its Strong Attack, Ruto can expend the Water Gauge to fire a powerful distant attack. It also gives Ruto the ability to create pools of water anywhere effectively allowing her to swim anywhere and manipulate water at will. Interestingly, these pools have fish (which appear to be Hylian Bass) swimming in them and they will jump out of the water during certain combos. 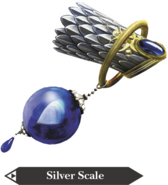 Promotional Render of the Silver Scale from Hyrule Warriors

Promotional Render of the Golden Scale from Hyrule Warriors

Promotional Render of the Water Dragon's Scale from Hyrule Warriors

Retrieved from "https://zelda.fandom.com/wiki/Zora_Scale_(Hyrule_Warriors)?oldid=529430"
Community content is available under CC-BY-SA unless otherwise noted.