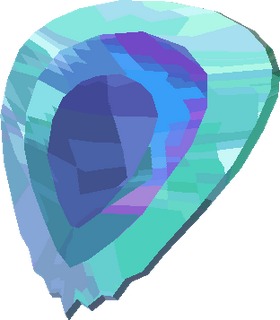 Zora's Flippers
Mermaid Suit
Zora Tunic and Armor
Water Dragon's Scale
Zora Scales are recurring Items in The Legend of Zelda series.[1] They are fragments of the skin of a Zora which seem to hold the aquatic identity of the species, as a non-Zora in the possession of one gets adapted to water.

In Ocarina of Time, the Silver Scale enhances Link's Diving capabilities to up to 6 meters.[2] It is required to enter Inside Jabu-Jabu's Belly.

In Phantom Hourglass, Zora Scales are Treasures that can be sold on Mercay Island to the Teller of Treasures for a random amount of Rupees.[9] It is also a highly valued commodity among members of the Ho Ho Tribe.

In Tri Force Heroes, Zora Scales are bronze-rarity Materials awarded for completing the following Levels and Drablands Challenges of the Riverside:

They can also be won in the Coliseum and Daily Riches, or purchased from the Street Merchant for 250 Rupees each.

Zora Scales are one of the Materials used to make the Zora Costume.[1] 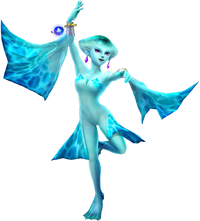 The Zora Scale is a class of Weapon used by Ruto in Hyrule Warriors. It is associated with Water.

The Lv.★ form of the Zora Scale is the 8-Bit Clock, which is based on the Magical Clock from The Legend of Zelda. It was added to Hyrule Warriors with the Majora's Mask Pack DLC. In Hyrule Warriors: Definitive Edition, instead of appearing as a separate Weapon, the 8-Bit Clock replaces the Sun Dragon Scale when the "8-Bit Weapons" Setting is turned on in Game Settings within the Settings menu.

In Hyrule Warriors Legends, the fourth form of the Zora Scale is the Sun Dragon Scale, which is associated with both the Elements of Water and Light.

Ruto winks to the screen, then forms a pool of water on the ground around her, which quickly turns into a whirlpool as she swims around in it. After a few seconds, the whirlpool shifts into a watery twister, before exploding and throwing enemies outwards. This attack damages enemies in a circular range around Ruto.