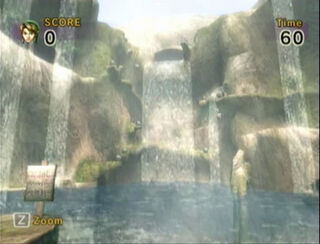 Zora River Target Practice,[1] also known as Stage 4-1,[2] is a Stage in Link's Crossbow Training. It is the first Stage of Level 4.

The camera leaves the largest waterfall and moves to a smaller waterfall to the left of the biggest one. On a path left of the smaller waterfall, three Jars sit side by side. An Orange Rupee can be discovered if Link shoots the leftmost of the three Jars. A Jar with a different design sits next to the small waterfall to the right of the three Jars. If Link had shot the Scarecrow from the earlier area 8 or more times and then shot the head, a new Scarecrow will appear in between the Jars on the left and right. Another horn will sound once the camera reaches its stopping point, starting the movement of the Targets. Two Targets will move along the path behind the small waterfall, starting near the three Jars and moving out of range behind the waterfall. Once these two Targets start moving, another Target will appear behind the small waterfall, moving towards the starting point of the first two Targets. Another Target will fall down the small waterfall as these three Targets move. Once these four Targets pass by or are shot, three more Targets will appear exactly the way the first two did, moving from the left of the path to the right. Once these three Targets start moving, a small gold Target will appear behind the waterfall and move right. Two Targets will fall down the waterfall at the same time the gold Target starts moving. Three Targets appear from behind the waterfall side by side, with the middle Target small like the gold Target from before. Three more small Targets will appear from the left side of the path, with the last one being a gold Target. While all these Targets move around the path, another Target falls quickly down the waterfall. In the end, one last Target falls down the waterfall. The whistle will then sound, signaling the camera to move to the final area.

Rivers in The Legend of Zelda series
Community content is available under GNU Free Documentation License unless otherwise noted.
Advertisement