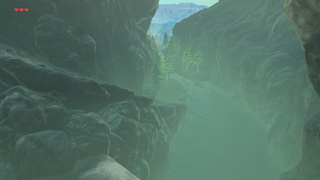 Zora River from Breath of the Wild

Hylia River
Lake Hylia
Ruto Lake
Zora's Domain
Zora's Waterfall
Zora River,(BotW)[1] also known as Zora's River,(OoT | TP | LCT)[2][name reference needed] is a recurring location in the The Legend of Zelda series. It is one of the main bodies of water in Kingdom of Hyrule, with its water source being either Zora's Domain or Zora's Fountain.

In Ocarina of Time, water from the Zora's River flows from Zora's Fountain, which serves as the water source of all Hyrule. While the region known as Zora River consists of a region of the river to the east, the river itself continues throughout Hyrule Field. Eventually, the water of Zora's River reaches Lake Hylia, passing through Gerudo Valley in the process.[3] At the northern section of the river is the Sleepless Waterfall,[4] a seemingly impassable waterfall that protects the entrance to Zora's Domain. Zora's River is accessible either by Hyrule Field or through an underwater portal located in the Lost Woods.

A few bridges are built over the river for easy traversing. Its waters, however, are infested with monsters. On the way to the Sleepless Waterfall is a group of frogs collectively known as the Fabulous Five Froggish Tenors, although they disappear when Link returns to the river seven years later.

Twilight Princess portrays Zora's River in possibly its largest incarnation thus far. The water from Zora's River comes from the throne room in Zora's Domain. It flows down to a section known as the Upper Zora's River, and from there the water splits into three branches. One branch flows into north Hyrule Field, and the other two wind down through an area known as the Rapids Ride. The latter branches serve as the water source for Lake Hylia, which is where the river ends. However, these parts of the river are not accessible by foot and can only be reached by canoe or by riding a Kargarok. Due to its immense length, the river serves as the location of two mini-games: Iza's Rapid Ride and the Fruit Pop Flight Challenge. Going against the rapids involves the Fruit Pop Flight Challenge, using a Kargarok for flight. Going downstream involves traversing the Rapid Ride in a kayak (similar to the one used in Lure Fishing).

When Link as a wolf first visits the Lanayru Province while it is covered in Twilight, he finds out that the Zora's River has dried up since Zora's Domain has completely frozen over. As such, Lake Hylia has dried up as well, threatening the lifestyle of the Zora people and impeding them from returning upstream.[5] To get to Zora's Domain, Link has to ride a Shadow Kargarok through the dried-up river. Upon reaching Upper Zora's River, Link will discover that the Zoras' entire domain has frozen over, and it is not until Midna warps a Molten Shard from Death Mountain into the Zoras' throne room that the ice will melt and the water will begin to flow again. Later, he must travel to Upper Zora's River by Shadow Kargarok a second time to defeat the Shadow Insects along the route and obtain their Tears of Light.

Zora's River appears in two stages of Link's Crossbow Training. The first appearance in Level 2 places Link inside a canoe and travels down the same section of the river as Iza's Rapid Ride. The second appearance of the river in Level 4 is specifically seated in the outer waters of Zora's Domain.