Zelda Wiki
Register
Don't have an account?
Sign In
Advertisement
in: Items, A Link to the Past Pages with Invalid or Missing Terms, Masks,
and 10 more 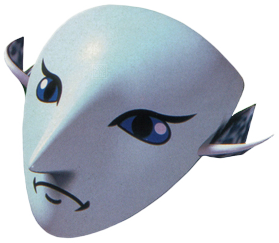 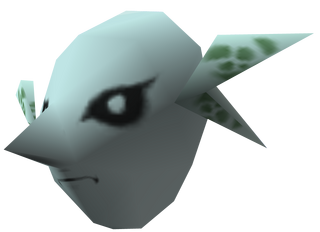 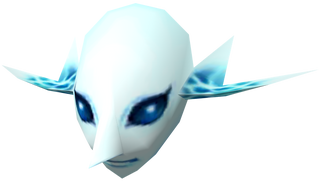 A Link to the Past (Ishinomori)
Hyrule Warriors
Cadence of Hyrule

Majora's Mask
Transforming into a Zora
The Zora Mask is a recurring Item in The Legend of Zelda series.[1][2] It resembles the face of a Zora.

The Zora Mask can be borrowed from the Happy Mask Shop after completing the Mask Trading Sequence in Ocarina of Time. It has no function other than to change peoples' reactions when Link talks to them. When shown to Princess Ruto, she will express her happiness that Link has become a Zora.[3]

The Zora Mask is one of four Masks used for Transformation in Majora's Mask.[4] When worn, it transforms Link into Zora Link. The Mask contains the spirit of the fallen Zoran hero Mikau, and when Link dons the Mask he inhabits the hero's body. With the transformation comes all the special abilities of that species, including a new fighting style, the ability to swiftly swim underwater, two Boomerang-like fins as an attack, and an electric barrier shield.

Link acquires the Mask while visiting Great Bay Region, where he notices a Zora near death floating in the water surrounded by Seagulls.[5] Once Link helps the Zora to shore, he tells him that he is Mikau, guitarist for the Zora band The Indigo-Go's.[6] He sings a song explaining that he was trying to help Lulu recover her eggs that were stolen from her by Gerudo Pirates, but was fatally injured in the process.[7] Full of regret, he cannot die in peace, and asks someone to heal his soul.[8] By playing the "Song of Healing," Link can rest Mikau's soul, leaving behind the Zora Mask.

In the A Link to the Past comic by Shotaro Ishinomori, Zora grants Link the Zora's Mask when he first meets the hero. After Link mentions that he is going to the Palace of Darkness to rescue the imprisoned Maiden, Zora takes one of his scales and places it on Link's face, calling it Zora's Mask, which is meant to disguise the hero's face and not look so conspicuous as he is sneaking around the palace.[9] Although Link is at first able to sneak around with the Zora's Mask without being noticed,[10] he is eventually discovered by a Eyegore, who sees right through Link's disguise.[11]

The Zora Mask appears as a costume for Ruto in the Majora's Mask DLC pack in Hyrule Warriors.

The Zora Mask appears as an Item for Skull Kid in the Symphony of the Mask DLC pack, found within the Frozen Grotto. When equipped, Skull Kid is able to use a Rapier and gains the ability to swim in deep water and shoot balls of ice.[12] While using the Zora Mask, it is possible to entirely bypass some of the puzzles in the Temple of Brainstorms.

Masks in The Legend of Zelda series
Community content is available under GNU Free Documentation License unless otherwise noted.
Advertisement