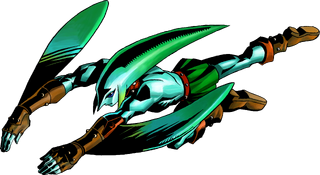 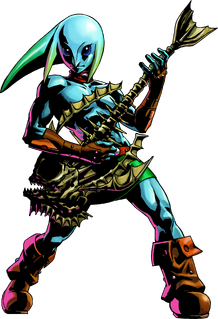 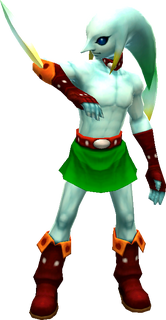 Zora Link is one of the forms Link can transform into in Majora's Mask,[1] achieved by wearing the Zora Mask. It is one of four Mask transformations in the game.

After Link finds Epona in Romani Ranch and gains access to the coast of Great Bay, he finds a dying Zora in the waters of the ocean. After bringing him back to the beach, Link listens to the last words of the Zora. He introduces himself as Mikau the guitarist, and explains that he was trying to retrieve the eggs of the vocalist of his band, Lulu. To do so, he had to enter the stronghold of the Pirates' Fortress. However, the Gerudo soldiers within defeated him, and he was sent back to the sea, gravely injured. Because he cannot accept death without helping Lulu first, he asks Link to at least calm his soul. Link then plays the "Song of Healing" and Mikau leaves him his essence, materialized into the Zora Mask before dying. Wearing this Mask enables Link to transform into Zora Link.

Link explores the aforementioned fortress, as well as Pinnacle Rock, to retrieve the lost eggs. He then goes to the Marine Research Lab to leave them in the Professor's care, and finally goes to the Great Bay Temple to restore peace to the ocean.

While in Zora form, Link gains many unique abilities which can be used to fight enemies, solve puzzles, and explore previously inaccessible areas, most notably underwater.

As Zora Link, Link attacks using his arms and fins. Tapping the B-Button three times will make Zora Link lunge his right arm forward, then swing with his left arm, and end with him kicking up into the air, in a three-move combo. By holding the B-Button and releasing it, he will put his hands together and release his two arm-fins as a projectile attack. Similar to the Boomerang, these fins fly through the air and eventually come back.

Zora Link is Link's only form in Majora's Mask that can freely swim underwater. Swimming is performed by holding the A-Button while submerged. While swimming, Zora Link has free reign of swimming in any direction and at a faster speed than normal. He can also walk on the bottom of the water by pressing the B-Button. In Majora's Mask 3D, Zora Link has the option to swim at a slower speed, making navigation of tight underwater corridors easier.

The Dolphin Jump is a technique Zora Link may perform while submerged in water. If Zora Link is swimming underwater and swims towards the surface, he will breach it and leap into the air. This technique can be used as an attack to fight Gyorg, as well as to reach heights too high to climb onto.

Zora Link can utilize an electrical Barrier that surrounds him to defend himself from and even attack enemies with. It is referred to as the Shield in Majora's Mask, the Zora Magic Force Field in the Majora's Mask manual, and as Barrier in Majora's Mask 3D. While swimming in the water, pressing the R-Button creates an electric Barrier around Zora Link. This can be used as an attack by swimming into enemies. While on land or standing underwater, pressing the R-Button instead has Zora Link extend his right fin into a Shield. By holding both the B and R-Buttons, it is possible to create the Barrier on land. In Majora's Mask 3D, Zora Link can swim faster by executing the barrier.

Similar to Deku Link, Zora Link is weak to fire and will be knocked out if he comes into contact with it.

While in Zora form, Link's Ocarina of Time takes the form of the Zora Guitar. This is the instrument that Mikau had played as a member of The Indigo-Go's band. This instrument is required to give effect to the "New Wave Bossa Nova" melody.

The Zora Guitar is primarily used to play the song to Lulu, and subsequently grant access to the Great Bay Temple by waking the Giant Turtle and then riding it to the temple.