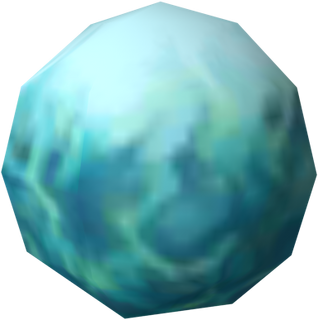 Teach Link the "New Wave Bossa Nova"
Zora Eggs are items in Majora's Mask.[1] They were laid by The Indigo-Go's singer, Lulu.

One late night, Lulu heard a strange sound in her room, and when she opened her eyes, saw the Gerudo Pirates entering her room. Despite her attempts to fight back, they were able to steal her eggs under guidance of the Skull Kid.[2] Mikau tried to take back the eggs that were taken by the thieving women by going to their fortress. However, he failed and ultimately ended up floating half dead near the Great Bay Coast.

According to the professor in the Marine Research Lab, it takes about one to three days for the Zora eggs to hatch after they are laid. Since the eggs are extremely sensitive to changes in the temperature, the professor set aside an aquarium where the Zora Eggs would be placed until they were hatched.[3] If they are not kept in the specially-made aquarium, the Zora Eggs may die, for the recent abnormal weather in the Great Bay region has caused the ocean temperature to significantly rise.[4]

Link must infiltrate the Pirates' Fortress and recover four of the seven eggs that were stolen by the Gerudo. The three remaining eggs can be found in the murky waters of Pinnacle Rock, where many Deep Pythons guard the Zora Eggs in their caves.[5] As Zora Link, the enormous serpents must be defeated before the eggs can be reached. Link can keep the Zora Eggs inside empty Bottles.

When the seven Zora Eggs are finally reunited inside the aquarium, they hatch and show Link the notes of the "New Wave Bossa Nova." This new melody must be played in front of Lulu in order for her to recover her voice. It will also awaken the guardian Giant Turtle of Great Bay, who will take Link to the Great Bay Temple.