This article refers to the friendly Zora race. For the enemy variety, see River Zora.

Template:Species Zoras (pronounced /ˈzɔər.ə/, ZOAR-ə),[1][2] known as Sea Zoras in Oracle of Ages,[3] are a race in Template:LZS. The Zora are an aquatic folk who possess fish and amphibian like traits, including fins, webbed feet and gills, which allow them to swim and thrive underwater. Zoras can come in many shapes and sizes, but are most commonly depicted as humanoids with long tail fins on their heads and finned appendages on their arms and legs.

Prior to their debut as a race in Ocarina of Time, Zoras were present in older titles as a hostile enemy. These Zoras appear radically different, appearing more reptilian and more fish-like than human. Both kinds of Zoras have appeared throughout Zelda series following their debuts, with the Zora race appearing almost exclusively to the 3D console games. In Oracle of Ages, the only game where both Zoras coexist, the enemy Zora are referred to as River Zoras to distinguish them from the peaceful race.[3]

Zoras are normally found in or near large bodies of water, but very rarely stray far away from them. In Hyrule, Zoras live in the Zora's Domain, a large cavernous fountain that is connected to the Zora River, which flows directly to Lake Hylia; it is common to see Zoras within these areas as well. Zoras, however, do not solely live in fresh water, but can also thrive in salt water, such as the Great Bay Zoras of Majora's Mask and the Sea Zoras of Oracle of Ages. In contrast to the enemy Zoras of earlier titles, the peaceful Zoras appear more distinctively humanoid than monstrous. Most individuals (but not all) have fins attached to their limbs and a tail at the back of their head, making their head alone resemble a fish. However, Zoras also come in various shapes and sizes, with some lacking the head fin and others, like King Zora, having a rotund appearance. Some Zoras possess fins that greatly resemble the folds of clothing, such as the case with Queen Rutela. Their skin color ranges between white, blue and gray, but few have also appeared bright red or brown as a seemingly rarer variant.

Zoras lay Eggs which hatch into tadpole-like young.[4] In spite of this, female Zoras are shown to have breasts, though this could simply be a design tool meant to distinguish between the sexes. They could be classified within traditional animal classes at a middle point between amphibians (that breath in air and water with gills, see Axolotl) and monotreme (an order of mammals that lays eggs and also produces milk for their offspring, see Platypus). Their Eggs hatch one to three days after they are laid,[5] provided that the water they lie in is of a proper temperature,[6] and that the Eggs that were laid at the same time are together.[7]

Zoras, like most races in Breath of the Wild, are known to have long lifespans, with a Zora in Zora's Domain stating that he is over 130 years old while still looking young.[citation needed] Zora children age in such a way where even as young adults they can still appear to be children before reaching a growth spurt.[8] As Zoras age, they hold themselves to higher standards of speaking as a matter of pride.[9]

In Ocarina of Time, the Zoras all live in the Zora's Domain, located in northeastern Hyrule at the end of Zora's River, where their domain is guarded by the impassable Sleepless Waterfall.[10] The Zora folk are responsible for guarding the Water Temple in Lake Hylia, which the Zora River flows into, as well as the Zora's Fountain, the source of the River's water, on behalf of the Royal Family of Hyrule.[11][12] Due to their close servitude, the Hyrulean Zoras have been allies to the Royal Family for years.[10] Lord Jabu-Jabu, who resides in the Fountain, serves as their patron deity.[13] King Zora leads the Zoras as their monarch ruler. The latter has a young daughter, Princess Ruto, who is left in charge of preparing Jabu-Jabu's meals.

As a child, Link visits the Domain in search of the Zora's Sapphire, the Spiritual Stone that was passed down by the Zoras.[14] Link saves Princess Ruto from Inside Jabu-Jabu's Belly, after she is swallowed by Jabu-Jabu due to being cursed by Ganondorf. As a reward, she entrusts him with the Zora's Sapphire as her engagement to him.[15]

Seven years later, after Ganondorf came into power, Morpha had caused the Zora's Domain and all of its residents to become frozen in ice.[16] Sheik had managed to rescue Princess Ruto,[17] who had then went to the Water Temple to save her people,[18] but it is Link who ultimately destroys the evil inside the Temple and thus saves Zora's Domain. His efforts also awakens Princess Ruto as the Sage of Water. Although Link had defeated Morpha, Zora's Domain never recovers in-game, as Ruto explains it will take time to thaw.[19] Only during the ending are the Zoras found to be thawed.

In Majora's Mask, the Zoras live in the Great Bay region of Termina, where they congregate in the Zora Hall as their home. The Zora Hall is also the home to The Indigo-Go's, a famous Zora band.[20] The band was planned to play at the Carnival of Time in Clock Town, but suddenly had to cancel when Lulu, the band's lead singer, lost her voice when she laid some Eggs. However, the Eggs were shortly stolen by the Gerudo Pirates. Mikau, the band's guitarist, had tried to recover the Eggs, but was beaten by the Pirates and left gravely injured in the coast. Link eventually finds Mikau and pushes him to shore, but he passes away, and after being healed, his soul is encased into the Zora Mask.

Wearing the Zora Mask allows Link to transform into Zora Link in the resemblance of Mikau.[21] Under the guise of this form, Link retrieves the scattered Zora Eggs, allowing Lulu to recover her voice and to subsequently open the way to the Great Bay Temple.

The Great Bay Temple is implied to be an important location to the Zora folk. It is said that should anything happen to the Temple, a disaster will befall the Bay and the Zora descendant of the Temple's protector.[22] The Zoras also have their own writing system.[23]

Oracle of Ages features both the Zora race and enemy Zoras, and distinguishes between the two as Sea and River Zoras, respectively.[3] The peaceful Sea Zoras live in a Village in the southern Zora Seas of Labrynna. One Sea Zora in the Village refers to the River Zoras as "savage and vulgar", making it clear that the two groups have no social connections to each other.[3] As in Ocarina of Time, the Sea Zoras' guardian is Lord Jabu-Jabu.[24]

In the past, the Zora Seas were polluted due to a curse inflicted by Veran. The pollution had made the Zora population fall ill and disrupted their way of life.[25] The pollution had also made the Zora King fall sick, becoming deceased in the present. His death left the Zoras with no ruler ever since.[26] This becomes an issue in Link's quest, as Link cannot enter Lord Jabu-Jabu and find his Essence of Time without the King's consent. Link purifies the ocean in the past by rescuing the Fairy Queen and cures the King's illness with a Magic Potion, allowing the Zora King to become well and survive into the present.

Although Zoras do not live in Holodrom in Oracle of Seasons, one Zora appears during a Linked Game. The Zora can be found inside the Hero's Cave, searching for a place to build a new Domain under King Zora's orders, but cannot find any place that exceeds Labrynna's seas.[27] They will request that Link reports back to King Zora their findings by telling him a Secret, which will prompt King Zora to upgrade Link's Sword.

In The Wind Waker, Zoras had evolved into the Rito following the Great Flood.[28] The only actual Zora who makes an appearance is the spirit of Laruto, the deceased Sage of Earth, whose prayers gave power to the Master Sword to repel evil.[29] Laruto was killed by Ganondorf's minions to dispel the Master Sword's power.[30][31] Link meets her in spirit long after her decease in the Earth Temple, who tells him to find her descendant and the next Sage of Earth, Medli.[32]

In Twilight Princess, the Zoras live in Zora's Domain near Lake Hylia. Many can be found down along the Zora River as well as in Lake Hylia proper, caring for and patrolling the Lake.[33][34] These Zora guards wear fish-shaped helmets over their faces and carry halberds with them. The bottom of the Lake is sacred to the Zora folk,[35] where the Lakebed Temple lies at its depths. The Zoras serve as the protectors of this Temple.[36] 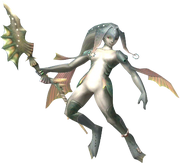 When Wolf Link arrives to Telma's Bar in Hyrule Castle Town, he finds Ilia with a Zora boy who is facing death. Link travels to Lake Hylia to investigate a possibly related incident,[37] and upon arriving in Zora's Domain, finds that it is frozen with all the Zoras encased in ice.[38] Using the Twilight Portal that opened above the Domain, Wolf Link and Midna warp a Molten Shard that fell in Death Mountain into the Domain, destroying the ice and thawing the Zoras trapped inside. Shortly afterwards they are approached by the spirit of Zora Queen Rutela. She explains that their Domain was raided by Zant's minions and herself executed as an example to her people.[39] Link is told that if he can help her save her son, Prince Ralis, and bring him back to the Domain, she will aid him in his quest.[40]

After restoring light to the Lanayru Province, Link as a Hylian helps Telma and Ilia take the Zora prince to Kakariko Village, where Renado heals him. After Ralis is saved, Queen Rutela makes a final appearance as she guides Link to her late husband's grave. She commends Link for bringing her son to Kakariko, as the village is sacred to her people and where they are laid to rest.[41] There she bestows him the Zora Armor, allowing him to swim underwater and reach the Lakebed Temple.

After completing the Lakebed Temple, Zoras can also be found in Death Mountain's hot springs.

In Breath of the Wild, the Zora live in Zora's Domain, located in the Lanayru region of Hyrule. While crossing Inogo Bridge, Link meets Sidon, the prince of the Zora. He claims that they are in need of a Hylian and leads Link to the Domain. Once there, it is revealed that the Divine Beast Vah Ruta is responsible for the heavy rainfall, having been reactivated sometime before Link's arrival.

Interestingly, the Zora seen in Breath of the Wild have a somewhat shark-like appearance. They can also be found in a variety of colors, unlike previous games. It is unknown if the Rito are descendants of the Zora as they are in The Wind Waker.

In Freshly-Picked Tingle's Rosy Rupeeland, while Zoras do not appear in-person, there is a reference to their existence. The landmarks Fish Head (Cape Treasure) and Muddy Fish Head (Gooey Swamp) are statues resembling a Zora's head. A Zora is also depicted on Madame Scratchcard's scratchcards.