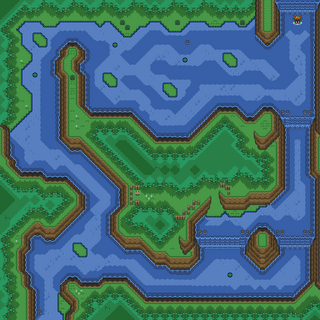 Zora's Waterfall,[1] also known as Zora's Falls,[name reference needed] is a location in A Link to the Past. It is the home of all Zoras. It plays the same role for the Zora as Zora's River and Zora's Domain do for the ordinary Zora, while in A Link Between Worlds they are implied to be the same location.

This large, lush area filled with streams, waterfalls and lakes is hidden at the base of Death Mountain, beyond the Waterfall of Wishing.[2] It serves as the source of the river which courses through Hyrule and ends at Lake Hylia. Unlike many other regions, it does not actually appear on the map itself, nor does it have a known equivalent in the Dark World (in the Dark World, the river ends at the Lake of Ill Omen). It is home of numerous aggressive Zora as well as the giant but amiable King Zora.[2][3]

There are a number of waterfalls in the region, but Zora's Waterfall itself can be found at the end of the river, beyond a large shallow lake that Link will have to make his way across, moving through the maze-like shallows while avoiding the numerous attacks from the Zora. This is where King Zora makes his home and here Link can buy the Zora's Flippers from him for 500 Rupees. When Link moves close to the waterfall, King Zora reveals himself and speaks to the hero. At the end of the game, King Zora is seen along with seemingly benign Zora offering flippers for sale at Zora's Waterfall.

Many of the enemy Zoras that appear at Zora's Waterfall are unique, and known as "Walking Type" Zoras. Appearing along with their fire-spitting brethren, they leap from the water and land in a standing posture in the shallows and chase after Link (similar to their behavior in The Adventure of Link). When hit, they are stunned, and can be picked up and thrown at other enemies. If Link hits them when leaping from the water, they can be sent flying onto the ledges and into the tree canopies surrounding the whole region.

Link can also find a Piece of Heart hidden in the foliage of this area.

In Ocarina of Time, Zora's Waterfall does not appear, but Zora's River is an extremely similar location leading to the Sleepless Waterfall, which acts as a barrier to impede outsiders from entering Zora's Domain.[4]

In Twilight Princess, a nameless waterfall appears at Zora's Domain that plays a similar role to the Sleepless Waterfall, acting as a barrier to the throne room.[5] Zora's Domain itself is an open-air region, possibly as a reference to Zora's Waterfall.

A place highly resembling Zora's Waterfall in the A Link to the Past comic by Shotaro Ishinomori, although it is situated in the Dark World instead of the Light World. After Link saves a fairy from a band of Thieves, the fairy leads him to the Zora's Waterfall, where Link encounters a Zola. Thinking it to be a monster, the young hero tries to fight it, but the Zola thanks Link for having saved Epheremelda, the fairy.[6] The Zola explains that he thought he was Romu, the knight who, with the Master Sword, scarred his forehead.[7] After Link is healed by Epheremelda,[8] the creature introduces itself as Zora. He and Epheremelda tell Link about the ruler of the Dark World and the usurper of the Triforce, Ganon, as well as Agahnim, Ganon's puppet.[9] With Agahnim's magic, he sent the Maidens to the Dark World so Ganon could steal their power, which makes Link realize that Zelda is still alive.[10]

Knowing this, Zora tells Link that one of the maidens is imprisoned in the Palace of Darkness nearby; however, he warns the young hero of the explosive materials, known as Firecorn, that are kept in there.[11] Link decides to go anyway, insisting that he must rescue the maiden trapped in the Crystal.[12] Before leaving, Zora allows Link to take Epheremelda as a guide and grants him the Zora's Mask to disguise himself and not look so conspicuous as he is sneaking around the palace.[13]

Waterfalls in The Legend of Zelda series
Community content is available under GNU Free Documentation License unless otherwise noted.
Advertisement