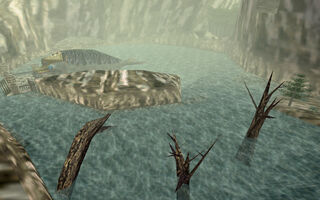 Zora's Domain
Ice Cavern
Inside Jabu-Jabu's Belly
Zora's Fountain is a location in Ocarina of Time.[1]

Zora's Fountain is the source of all water in Hyrule. Its waters flow through Zora's River and eventually reach Lake Hylia to the south, passing through the bottom of Gerudo Valley in the process.[1] It is connected to Zora's Domain, which also gets it water from the fountain. In order to enter Zora's Fountain, however, King Zora's permission is required.[2] The Zora's Fountain is famous for being the home of Lord Jabu-Jabu, the guardian deity of the Zora people.[3] Being the source of Hyrule's water, the Zoras guard the sacred fountain as well as their deity since they serve the Royal Family of Hyrule by protecting the water source.[4][5]

Located at the back of the fountain is the Ice Cavern and a Great Fairy Fountain, where Link can obtain the spell of Farore's Wind from the Great Fairy living within. This is also the place where Link ultimately receives the Zora's Sapphire from Princess Ruto after venturing inside Lord Jabu-Jabu's belly and defeating Barinade, a parasitical monster.

Seven years later, after Link awakens from having withdrawn the Master Sword from its pedestal, he returns to Zora's Fountain to find that Lord Jabu-Jabu is missing. Since Zora's Domain has been completely frozen due to an evil curse from a monster of the Water Temple, Zora's Fountain has also taken its effects, with small ice platforms covering the fountain; furthermore, the water is now infested with Octoroks. The ice platforms around the fountain allow Link to enter the Ice Cavern and obtain the Iron Boots, which are necessary to enter the Water Temple.

If Link sinks to the bottom with the Zora Tunic and Iron Boots, he will find a Piece of Heart and several green Rupees. Moreover, when he finds the Silver Gauntlets in the Spirit Temple, he can lift a stone near the Great Fairy's Fountain to discover an underground passage. Using the Lens of Truth, Link can see and defeat invisible enemies within, then explore the passage to climb towards the hideout of a Gold Skulltula.

Fountains in The Legend of Zelda series
Community content is available under GNU Free Documentation License unless otherwise noted.
Advertisement