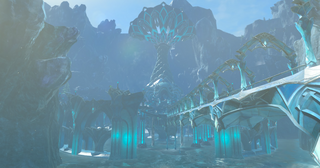 Zora's Domain from Breath of the Wild

Zora's Fountain
Zora's River
Zora's Waterfall
Zora's Domain,(OoT | TP | ALBW | BotW)[1][2] also known as the Land of the Zoras,(OoT)[3] is a recurring location in The Legend of Zelda series. It is based on Zora's Waterfall from A Link to the Past. It serves as the home of the aquatic race known as the Zora.

In Ocarina of Time, Zora's Domain is located in the northeast section of Hyrule and is home to King Zora and his daughter, Princess Ruto.[4] It consists of a large cavernous area mostly filled with water, with a large waterfall flowing from the top into the lower area. Its source of water comes from Zora's Fountain, to which it is closely linked. The only ways to access the domain are from Zora's River or via a secret entrance hidden underwater in Lake Hylia; however, only those who have some connection with the Royal Family of Hyrule are allowed to enter.[5] To enter via Zora's River, Link will need to play "Zelda's Lullaby" in front of the seemingly impassable waterfall at the end of the river to prove his connection to the Royal Family. This will cause the waterfall to momentarily split in two, allowing the young hero to access Zora's Domain.

Link's first visit to the domain is called upon during his search for the third Spiritual Stone, the Zora's Sapphire. He ventures Inside Jabu-Jabu's Belly in Zora's Fountain to rescue Princess Ruto, receiving the Spiritual Stone in return. Seven years later, after Link awakens from having pulled the Master Sword from its pedestal, the young hero returns to Zora's Domain to find it completely frozen over. Moreover, the entrance to Lake Hylia has been blocked by ice. The only Zoras that inhabit it are King Zora and the shopkeeper of the Zora Shop, and both of them are frozen over by Red Ice, which only Blue Fire can melt.[6] Sheik explains that the ice is caused by an evil curse, and the source of the curse is Morpha, a monster in the Water Temple. The only way to restore Zora's Domain to its natural state is by destroying Morpha. Thus, Link ventures to the Water Temple where, with the aid of Princess Ruto, the source of the curse is shut off.[7] Princess Ruto, awakening as the Sage of Water, thanks to Link for his help and reassures him that Zora's Domain and its people will eventually return to their original state.[8]

During the ending credits, Zora's Domain is shown to have been thawed out, although it is still empty since all of the Zoras are in Lon Lon Ranch celebrating the defeat of Ganondorf.

In Twilight Princess, Zora's Domain is located in the Lanayru Province, and it serves as Hyrule's source of water. The water flow comes from the throne room, situated above the domain. From here, the water streams into the rest of the village, forming the Zora's Waterfall and continuing its path to Upper Zora's River and eventually reaching Lake Hylia. Zora's Domain is also connected to Snowpeak, and it is the only way to access that region other than Warping. Link can access the throne room by asking one of the Zoras near the waterfall to take him upstream.[9]

When Link first visits Zora's Domain, he finds that it has been completely frozen over and all the Zoras have been trapped under the thick sheet of ice. Since the domain is frozen, Zora's River has dried up as well as Lake Hylia.[10] Link must warp a Molten Shard from Death Mountain with the help of Midna and drop it into the throne room, which will cause the ice to shatter and allow the water to flow again. With Zora's Domain now thawed and the Zoras safe, Wolf Link and Midna begin to head out of the throne room when Rutela makes an apparition before them, stopping them on their way out. She thanks them for saving her village and her people,[11] and informs them of her unfortunate fate.[12] Rutela asks Link to save her son Ralis and promises to give him the Zora Armor in return, which is necessary to enter the Lakebed Temple.[13]

Later on in the game, after Link obtains the Coral Earring from Prince Ralis, the young hero must revisit Zora's Domain to fish in an area known as the Mother-and-Child Rocks.[14] It is here that the Reekfish dwell, a rare fish specimen unique to the Zora village.[15] Once Link manages to catch a Reekfish, he will be able to pick up the Reekfish Scent that is necessary to navigate through Snowpeak.

After Link obtains the Water Bombs and Zora Armor, he can sink to the bottom of the throne room and blow up the remains of the Molten Shard, releasing a Goron that was trapped in it. By speaking to him, Link will receive a Bomb Bag. Eventually, Prince Ralis will return to Zora's Domain and sit in the throne room in place of his mother.

Zora's Domain is last seen during the ending credits, showing Queen Rutela looking over her son.

Zora's Domain appears again in A Link Between Worlds as the abode of Queen Oren and her Underlings. When Link first visits Zora's Domain, he bumps into the Shady Guy, who has stolen Oren's Smooth Gem. This causes discord among the Zoras, as Oren begins to uncontrollably bloat without the Smooth Gem. After Link returns the stolen Smooth Gem, Oren gives the young hero the Zora's Flippers out of gratitude.

After Oren is trapped within a Painting and subsequently released, she vows to return to Zora's Domain once Link defeats Yuga and Ganon.[16]

In Breath of the Wild, Zora's Domain is located in the Lanayru Region and is the home of the Zora. Travelers entering the area by foot cross the Great Zora Bridge over Ruto Lake and are greeted with a view of a large stone fish surmounting the Domain, which represents Lord Jabu-Jabu.[17] Unlike other towns in the game, Zora's Domain consists of a single extensive structure instead of separate buildings. Its design include a number of curving bridges and open spaces, which are often bounded by colonnades instead of walls. The Domain's structure includes large quantities of Luminous Stone, which causes several portions of it to glow softly during the night. These structures are maintained by two Zora artisans, Fronk and Ledo, apprenticed under Dento.[18][19] Upkeep of the Domain requires the use of large quantities of Luminous Stone.[20]

The Great Zora Bridge opens into a plaza centered around a statue of Mipha. The far side of the plaza is bounded by the central structure of the Domain. The central opening in the wall leads down a short flight of stairs to a pool containing Fleet-Lotus Seeds and Bright-Eyed Crabs. The Ne'ez Yohma Shrine is found in the center of this pool. To the sides of this opening are a shopping center, Marot Mart, and the Seabed Inn. A pair of stairways on the outer sides of these buildings lead to the Domain's second floor, above the stores and shrine, where a large roofed area contains several water-filled pools where the Zora sleep at night. Several Sneaky River Snails can also be found around these pools. Two further flights of stairs lead to the royal throne room on the third level.

The Domain is ruled by the family of King Dorephan and his son Sidon. Their princess, who was a sister to the prince and daughter to the king, was Mipha, who was also a deceased Zora Champion of Hyrule, tasked to pilot the Divine Beast Vah Ruta.

Level 4 of Link's Crossbow Training is specifically seated in the outer waters of Zora's Domain. The stage begins facing a waterfall and has targets falling with the water at various speeds. A few pots can be shot for additional points. In the second area, Link shoots at targets dropping with the waterfall and panning through openings in the mountainside. The stage normally ends in an overhead view of the two waterfalls as the targets again follow the water downwards. The alternative end can be unlocked by getting 1000 points on the Scarecrows from the first two sections. The stage ending scene will take Link above the waterfalls and offer a larger cluster of targets drifting towards him. Many more gold targets are found in this area among the regular and false targets.

The frozen Zora's Domain appears as part of the Lake Hylia Stage in Hyrule Warriors.

In Hyrule Warriors: Age of Calamity, Zora's Domain is the residence of the Zoras, King Dorephan, Sidon(who is still a child at the time), and Mipha. It is the place where Zelda asks King Dorephan to give permission to Mipha to pilot Divine Beast Vah Ruta. It is also the battlefield where the Scenario, "Mipha, the Zora Princess" takes place.