Zelda Wiki
Register
Don't have an account?
Sign In
Advertisement
in: Faron Grasslands, Ruins, Locations, Locations in Breath of the Wild 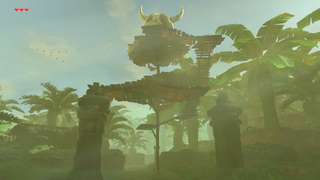 The Zonai Ruins are a location in Breath of the Wild.[1][2]

The Zonai Ruins are situated in the depths of the Faron Woods,[3] in the heart of the Faron Grasslands. A road heading out from Pagos Woods crosses the Floria River via a low wooden bridge, heading towards the ruins, before turning off towards the southeast and on through the steamy sea of trees. Passing through on occasion on this road with his Donkey, on his trek to hock his wares from Lurelin Village, is Chumin.[4] Meeshy, an adventurer,[5] and Totsuna, a dragon-enthusiast,[6] can also be found travelling on this road. Found northeast across the Floria River, two tall, carven stone pillars mark the ruins' exact location. Near the base of the western pillar is a large stone dragon statue,[7] resting near some crumbling stone facade, completely covered in green moss. Between the two pillars, a large, tall, wooden Monster Stronghold can be found, hosting several Bokoblins. There are also several wooden Crates, wrapped in banana leaves, on two of the encampment's levelled platforms. To the north, an Electric Wizzrobe frolics in a green clearing. In the clearing are two metal Crates, which can be manipulated with the Magnesis Rune. On the ground are square stone pavers and a worn dirt path, which denotes an ancient road no longer marked on any map. This old path heads north through the clearing before veering off to the northwest. This path is marked by another stone dragon statue, which lies between Harker Lake and the aforementioned clearing, and whose stone head points in the direction of the Damel Forest.

These ancient ruins are thought to be the home of a mysterious tribe of barbarians known as the Zonai, who vanished long ago.[8][2] The Zonai Ruins mark only the entrance to a much larger ruin complex, which spans from its start at the Floria River, through the Damel Forest, and up to the Spring of Courage. It appears to follow the winding, serpentine flow of the Dracozu River.

At the aforementioned Monster Stronghold, at the very top of the wooden structure, is a Wooden Chest containing a Sapphire. West of the ruins, on top of a small hill, is a small cave blocked with a breakable rock wall. Inside are four Ore Deposits. East of the ruins' pillars, through the woods, is a small pond teeming with fish. Above this is a tall hill with a long fish-filled lake, bordered with some trees and much vegetation. It's fed by a small waterfall from the east, and along this lake's western shore is a rocky overhang where several Rushroom can be picked.

Up on this latter hill, hiding amidst the vegetation—and appearing only at night—is a single Blupee.