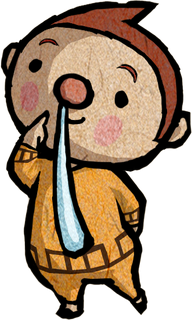 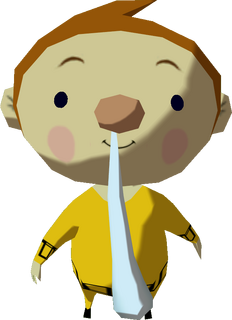 Zill is a recurring character in The Legend of Zelda series.[3][2]

In The Wind Waker, Zill is the younger son of Abe and Rose on Outset Island. The inquisitive boy lets his nose run on purpose, and follows his older brother, Joel, and Link around persistently. Interestingly, Zill's nose will continue to run even if he is in the water.

Zill appears in The Minish Cap as a young child in Hyrule Town. He is first seen north of Hyrule Town Square after Link obtains a Small Shield, where he claims that he has been good all year, and is waiting for the Minish to come play with him.[4] After Link obtains the Earth Element and returns to Hyrule Town, Zill accompanies the Hurdy-Gurdy Man, surrounding Link until he Fuses Kinstone Pieces with the Hurdy-Gurdy Man.[5] Afterwards, he can be found standing in front of Funday School, wishing he could attend.[6]

After Vaati impersonates King Daltus, Zill and his friends move to the second floor of the Happy Hearth Inn, where they run around.[7] Once Link has obtained the Ocarina of Wind, he moves to stand outside Simon's Simulations, telling Link that it is open.[8]

When Link has encountered the spirit of Gustaf at Lake Hylia, Zill begins wandering north of the Fountain, claiming that a Ghost is inside Hyrule Town Well.[9] After Link obtains the golden Kinstone Piece from Gustaf's spirit in the Royal Crypt, Zill moves to the roof of the Royal Hyrule Library, where he is impressed with the view.[10] Finally, once Link acquires the Wind Element, Zill returns to the second floor of the Happy Hearth Inn, where he runs around with his friends for the remainder of the game.[11]

Link can Fuse Kinstone Pieces three times with Zill,[12] although he is unique in that the three Fusions associated with him can also be performed with a Forest Picori in Minish Village. Each Fusion results in a Lily appearing in Castor Wilds; each one leads to a new area while Link is Minish-sized.