This article is about the non-canon game. For the titular item, see Wand of Gamelon (Item). 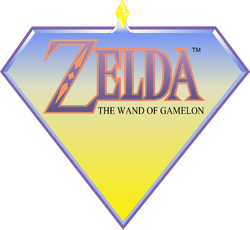 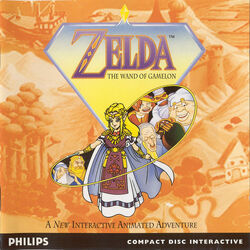 Zelda: The Wand of Gamelon guide
at StrategyWiki

Zelda: The Wand of Gamelon is a video game developed by Animation Magic[1] and released for the Philips CD-i in 1993.[2] It was developed in tandem with, and released on the same day as Link: The Faces of Evil,[3] and followed up a year later by Zelda's Adventure, which was developed separately by Viridis Corporation.

A product of a compromise between Nintendo and Philips due to their failure to release a CD-ROM based add-on to the Super Nintendo Entertainment System,[4] The Wand of Gamelon, alongside the other two, are the only licensed The Legend of Zelda games developed for and released on a non-Nintendo system. The games have been the subject of much criticism,[5] and Nintendo does not recognize them as canon to The Legend of Zelda series.[6]

King Harkinian announces that Duke Onkled, ruler of the island of Gamelon, is under attack by the evil forces of Ganon, and that he is going to the island to aid him. Princess Zelda becomes worried for her father's safety, but Harkinian reassures her that he will take the Triforce of Courage to protect him. He tells Zelda to send Link for help if he does not return in a month. Impa also assures Zelda that her father will safely return, according to the Triforce of Wisdom's vision. An entire month passes without word from the King. As instructed, Zelda sends Link to find him, but he fails to return either. Zelda then decides to venture forth herself to search for Link and her father, taking Impa along with her.

In Gamelon, Zelda does battle with many creatures working for Ganon, and meets many friendly characters and obtains a variety of useful items along the way. On her adventure, she confronts and defeats several of Ganon's minions: Gibdo, Iron Knuckle, the Three Witches, Wizzrobe, Hektan, and Omfak. Between her battles, Zelda and Impa learn from the Triforce of Wisdom that several of Gamelon's citizens have been captured by Ganon's minions and gone missing,[7] and eventually learn that the same fate had befallen her father as well who was captured by Ganon himself. Although Link's fate remains unknown, Zelda meets Lady Alma after saving her from Wizzrobe, and learns that she had once met with Link. Eventually, Zelda reaches Duke Onkled's castle, Dodomai Palace, where she frees Lord Kiro and learns that Duke Onkled is actually working with Ganon and had betrayed the King. She confronts Onkled and forces him to give her the key to Reesong Palace, where Ganon is hiding. Zelda then later learns from Myra, a woman encountered earlier in Hanyu Forest, that only the Wand of Gamelon can defeat Ganon, which she finds in the Shrine of Gamelon after defeating its keeper Omfak.

At Reesong Palace, Zelda uses the wand to imprison Ganon inside a book with chains, and rescues her father. Duke Onkled is arrested and turned over to the King, and begs for mercy. He is made to "scrub all the floors in Hyrule" as his punishment. Zelda wonders where Link had went to, but Lady Alma, present at the King's liberation, calls him a bore. Zelda then takes her mirror and throws it away, which breaks and inexplicably releases Link, implying that he was trapped inside it. He seems to have no recollection of what happened. The group then celebrates by having a feast.

The Wand of Gamelon marks the first game in The Legend of Zelda series where the eponymous princess, Zelda, is playable. The game is different from most conventional Zelda games in that it is played using a side-scrolling view, similar to that in The Adventure of Link. Stages are accessed from a world map which are selected with a cursor, with more areas becoming available as Zelda progresses through the game. Stages consist of several sectioned areas within them, usually with multiple enemies in each section. If Zelda loses all of her Life Hearts and perishes, a Continue screen with a counter will be displayed, allowing Zelda to restart at the entrance of the area she was last in. If Zelda however dies three times, she will be sent back to the world map and be forced to start over. Each stage has two Triforce Maps that serve as exits; one at the beginning and one at the end. In addition to simply reaching the second Triforce Map in each stage, some stages also have special items and power-ups in them that are necessary to progress through later areas. Zelda encounters several NPC characters in certain stages who provide Zelda with essential equipment and information, often requiring a specific item in return found somewhere else in the game.

Zelda also collects "Rubies" dropped by defeated enemies, which are used to buy extra equipment from The Merchant's shop in Sakado. Some items in the game also require Rubies to use, and will use up a certain amount each time they are used.

Character interactions are achieved through the use of full motion video cutscenes, which are activated when Zelda approaches a character and touches them with her sword. The game explains this by referring to Zelda's sword as the "Smart Sword"; a sword Zelda uses that cannot hurt friendly characters and instead encourages them to talk.[8] The cutscenes use voice acting to provide Zelda with instructions and story. Very little in-game text is encountered otherwise.

Zelda: The Wand of Gamelon and Link: The Faces of Evil, and later Zelda's Adventure, were the result of a compromise between Nintendo and Philips. After an attempt to produce to CD-ROM based add-on for the Super Nintendo Entertainment System with Philips failed, Nintendo reached a compromise and gave Philips the license to five of their franchises' characters for use in the Philips CD-i.[3][9] Zelda: The Wand of Gamelon and Link: The Faces of Evil were developed by Animation Magic, then known as Dale Disharoon, Inc. early in development. The developers settled on making two separate games featuring Link and Zelda. Due to the small development budget and time restraints, the developers resolved to combine the funding to produce a single game engine that would be used by both games.[3] The development team consisted of four programmers, one audio engineer and composer, four artists, a producer, and a freelance writer who would help to design both games. As Philips were expecting full-motion video animation in the games, the games' cutscenes were outsourced to a new animation company in St. Petersburg, Russia, founded by games' creator Dale DeSharone and Igor Razboff. Animators were flown over to work on the game cutscenes.[3] The two companies would eventually combine and become known as Animation Magic.[1]

Very little input was given by Nintendo during the development of the games, who were mostly concerned with the designs and sketches of Link and Zelda.[3] Philips also gave very little input, but Dale DeSharone expressed in an interview that he believed Philips would not have approved of a top-down view for the games, as it would have "looked old, and (would not) make use of the CD-i capabilities."[3] The lack of input from both companies allowed the developers room for creative development.

The three Zelda CD-i games, particularly The Wand of Gamelon and The Faces of Evil, were subject to much criticism from reviewers and series fans alike.[10] The game sold poorly and suffered from critical reception,[11][5] with key complaints regarding the confusing and unresponsive controls, dull and repetitive gameplay, and poor animation and voice acting used in the game's cutscenes.[10]

This game, along with The Faces of Evil, were frequently used to create "YouTube Poop" remix videos, which added to their reputation among series fans.[12] Characters such as King Harkinian and Duke Onkled were particularly popular.