Zelda Wiki
Register
Don't have an account?
Sign In
Advertisement
in: Objects, Books, Objects in Breath of the Wild
English 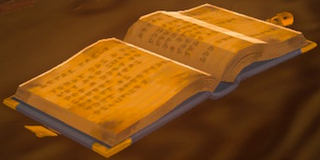 Zelda's Research Notes
Zelda's Diary is an Object in Breath of the Wild.[1]

The second page follows the events of "Resolve and Grief", as Princess Zelda made her way to Goron City.[3] Princess Zelda explains her discomfort with Link's stoic demeanor and rationalizes that he must hate her for her inability to awaken her powers.[3]

The third page details the events of "Zelda's Resentment", wherein Princess Zelda lost her temper and scolded Link for following her around and making her uncomfortable with his silence.[4]

The fourth page recalls how Link saved Princess Zelda from Yiga Footsoldiers at the Kara Kara Bazaar, reflecting upon the events of "Blades of the Yiga".[5] Princess Zelda resolves to treat Link more fairly and to initiate dialogue with him.[5]

In the fifth page, Princess Zelda details her discoveries about Link's personality, such as his inability to resist delicious Food.[6] Princess Zelda explains that, much like with her overbearing father, Link feels overwhelmed by the stress of being a hero as feels he must maintain a calm and collected appearance in spite of his challenges.[6] Princess Zelda also muses that she might be able to reveal her own troubles to Link.[6]

The events of "Father and Daughter" are explored in the sixth page of Zelda's Diary. After being reprimanded by her father for not devoting enough time to awakening her powers, Princess Zelda explained that she has been training since she was a child and despite her efforts, she is unable to tap into her hidden powers.[7] She also explains that her training has been stunted by the lack of any teacher to guide her, as her mother passed away before her training began.[7] She finishes the page by explaining that she will travel to the Spring of Power to pray to Hylia in an attempt to awaken her sealing powers.[7]

Following the events of "Slumbering Power" wherein Princess Zelda attempted to awaken her powers at the Spring of Power,[8] she dreamt of a woman surrounded by a bright light attempting to speak to her.[9] Though she could not hear what this woman was trying to say to her, she documented the dream within the seventh page of her Diary and wonders if she could have heard the woman if her powers were fully awoken.[9]

The eighth and final page was written the morning after the events of "To Mount Lanayru".[10] Princess Zelda announces that she turned 17 years of age and consequently will make her way to Mount Lanayru to pray at the Spring of Wisdom in the hopes of awakening her sealing powers.[10] As she has not spoken with her father since his confrontation with her, she resolves to speak with him after bathing in the Spring's waters.[10] She finishes her Diary noting that she has experienced an overwhelming sense of dread since her dream, but fearing that nobody would listen to her concerns while her powers remain dormant.[10]