Zelda Wiki
Register
Don't have an account?
Sign In
Advertisement
in: Princess Zelda, Enemies, Enemies in The Legend of Zelda TV Series 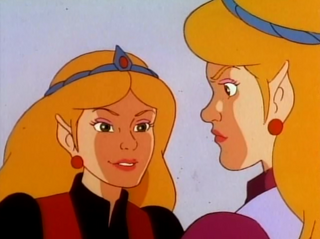 Zelda's clone appearing out of the Mirror

The Legend of Zelda TV series
Zelda's Clone is a character in the "Doppelganger" episode of The Legend of Zelda TV series.[name reference needed] As her name implies, she is Princess Zelda's evil counterpart, who can easily be told apart from the original Zelda due to the clone's darker clothes. Moreover, Zelda's clone is more willing to kiss Link, as she does so three times throughout the episode.

Ganon, tired of always failing in his plans to steal the Triforce of Wisdom, decides to use a new magic spell which plants a Mirror in Princess Zelda's room.[1] Later on, when Zelda is brushing her hair in front of the Mirror, nightlight strikes it and copies her reflection in an evil clone of her. The clone orders the Moblins that accompany her to tie her up and take her into the Underworld via the Mirror.[2] Link, hearing Zelda's screams, rushes up to her room and defeats several of the Moblins, but one of the foes accidentally throws a vase at the Mirror, breaking it and impeding Zelda's clone from taking the Triforce of Wisdom to Ganon via the Mirror.[3] After Link zaps all of the Moblins, the clone kisses him unexpectedly, which overjoys Link, although he says the kiss was colder than he expected.[4] Zelda's clone then tells the young hero that they, along with the Triforce, are going to attack Ganon.[5] Unlike the real Zelda, who usually makes the Triforce float when she takes it somewhere,[6] the clone makes Link carry the rather heavy sacred relic, saying that she does not want to have to deal with it. However, as the duo are making their way to an Underworld entrance, Link realizes the truth about the evil clone as she has no reflection, but he decides to follow her anyway to rescue the real Zelda.[7]

When they arrive to the Underworld, Moblins and Stalfos attack the duo, and when the clone rewards Link with a kiss for having defeated them, the real Zelda appears after having escaped Ganon's clutches. The evil clone takes the Triforce of Wisdom and runs to deliver it to Ganon, with the princess and Link in pursuit.[8] Eventually, Zelda catches up to the clone, but during the struggle, they fall into the muddy water, making their clothes the same color and leaving Link unable to tell who the real Zelda is. The young hero decides to determine who the real one is by a "kissing contest,"[9] and when one Zelda slaps him and refuses to kiss him, he knows that she is the real one because the evil clone had willingfully kissed him several times before.[10] Taking matters into her own hands, Zelda picks up Link's sword and zaps the evil clone herself.[11]