Zelda Wiki
Register
Don't have an account?
Sign In
Advertisement
in: Islands, Northwestern Sea, World of the Ocean King,
and 2 more 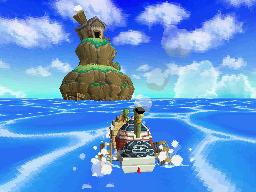 Zauz's Island is a hidden island located in the northwest corner of the World of the Ocean King in Phantom Hourglass.[1] It is home to the blacksmith, Zauz, who lives in utter solitude amongst the several Cuccos that reside there as well.

The island is the northernmost island in the northwestern sea, and does not appear on Link's Sea Chart until he is close enough for Ciela to notice it.[2] The location of the island is first revealed by a map inside a hidden cave on the Isle of Gust, which was drawn by the Old Wayfarer. After Link saves Tetra from the Ghost Ship, Oshus tells him he must go to Zauz's Island, and reveals its location.[3] The island is one of the smallest islands that can be visited in Phantom Hourglass, and unlike most other islands, is made up of a single piece of land. In the center of the island are two raised pieces of land. The one on the left is larger, and is home to Zauz's house and a fenced in area containing three Cuccos. In order to reach the one on the right, Link must pick up a Cucco nearby and use it to glide across the gap. It is home to a Treasure Chest containing a Wisdom Gem. The island is also home to a small puzzle of sorts, described in vague detail by a stone tablet at the northern coast of the island. On the island, there are two pairs of stone tiles; one in the west, and one in the east. When two connecting lines are drawn between each pair, they converge at a point at the isle's southern tip. If Link digs at the intersection of the two imaginary lines, he will unearth a buried Treasure Map.[4]

The southwest area of the island is home to the island's Dock, as well as the island's Mailbox, which is located just a few steps to the right of where Linebeck stands. From there, a path heads straight to the right and then straight up towards Zauz's house.

On the larger of the two raised pieces of land is Zauz's house. If Link arrives here before rescuing Tetra, he can speak to Zauz, who will tell him that there is nothing he can do for him at the moment. However, he then proceeds to say that Link will one day require him, and should come back then.[5] Link must visit Zauz's house three times throughout the game. The first of these is after he rescues Tetra, and Oshus tells him that he must visit Zauz, as he knows how to defeat Bellum.[3] When Link speaks to Zauz, he will inform him that the three Pure Metals are required to forge the Phantom Sword,[6] which is the only weapon capable of defeating Bellum.[7] He then tells Link that he can proceed further in the Temple of the Ocean King by drawing a special symbol on a certain door.[8] This symbol can be found on the back wall of the house. The second time that Link must visit Zauz's house is after he collects the three Pure Metals. Upon presenting them to Zauz, he will begin forge them into the Phantom Blade, but he says that it will take some time.[9] After Link leaves the island and has a final duel with Jolene, the blade will be completed, and he must return to Zauz's house for a third and final time to receive it. Zauz will then tell Link that he must speak to Oshus, who will complete the blade by adding the Sand of Hours.[10]