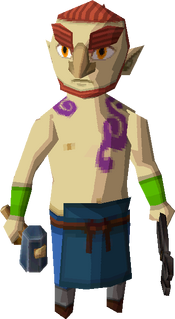 Zauz is a character in Phantom Hourglass.[3]

Zauz is the blacksmith who helps Link by forging the blade of the Phantom Sword used to defeat Bellum. The Sword Blade is made of three Pure Metals,[4] which Link must collect by befriending the island natives and delving through their respective temples. Zauz tells Link to return in time, as the forging of the Sword Blade is a lengthy process.[5] After Link defeats Jolene one last time, Zauz will have finished the Sword Blade upon returning to his island.

Zauz provides Link a secret that proves to help him navigate further into the Temple of the Ocean King. By drawing an ancient symbol on a particular red door on one of the temple's many levels, he will be able to access an entirely different temple floor,[6] and by extension, the remaining two Sea Charts.[7]

When Zauz first speaks to Ciela, he indicates that he is not human; later dialog suggests he is of the Cobble race, which defended the Ocean King.[8] He shares dark skin and a large, oddly-colored nose with King Mutoh and his Knights.

Zauz is first mentioned by Oshus, who tells Link to visit the blacksmith since he knows how to defeat Bellum.[9] However, after Linebeck is captured by the monster, Jolene is sent in Link's stead.[10] When the pirate reaches Zauz's island, Zauz himself is in his home working. As he crafts a Sword to defeat Bellum, Jolene asks if he is finished yet.[11] Zauz replies that defeating Bellum requires a true Phantom Sword.[12] Beginning to fret, Jolene tells him that they are in a hurry and asks him if he can finish it faster.[13] Zauz says that it is a difficult process and suggests Jolene has some tea.[14] The pirate girl says they need the Sword as soon as possible and again urges him to hurry.[15] Eventually, Zauz completes the Phantom Sword and Jolene brings the weapon to Link.[16]