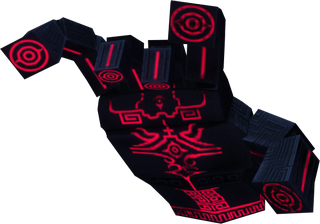 Like Zant Masks, Zant's Hands only appear in the Palace of Twilight. They pursue Link, attempting to take back a Sol and return it to the altar from which it was taken.[1] If the Zant's Hand follows Link, tense, sinister music plays, in which the tempo becomes faster and louder when the Zant's Hand has reached Link.

Zant's Hands are indestructible while they are pursuing Link.[1] They can only be temporarily stunned by either being struck with the Sword when they drop down, shot with three Arrows, or being hit with the Clawshot three times. The Clawshot is also effective to recover a Sol that a Zant's Hand has taken. In both the east and west wing of the Palace of Twilight, when Link walks through a door with the Sol, the Zant's Hands will follow through portals in the walls. After Link removes a Sol from the Palace of Twilight's East or West wing, the Zant's Hand in that area will return to its original spot and remain lifeless.

Zant's Hand appear as part of Zant's moveset in Hyrule Warriors. It also appears as part of Twili Midna's moveset included in the Twilight Princess DLC pack. The hand features green markings instead of red.