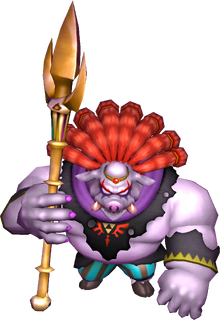 Yuga Ganon is the joint form of Yuga and Ganon that serves as the primary antagonist and final Boss of A Link Between Worlds.[1][note 1] The beast results from Yuga fusing with Ganon after the former resurrects the latter, and takes on the combined appearances and abilities of the two.

In Lorule, Yuga uses the descendants of the Seven Sages along with Princess Zelda to resurrect the Demon King and holder of the Triforce of Power, Ganon, who Yuga claims will help him attain true beauty.[2] After releasing Ganon from his seal in darkness, Yuga proceeds to fuse with Ganon's form and the Triforce of Power,[3], transforming into a being that takes on the physical attributes of both Yuga and Ganon. Now possessing the Triforce of Power, Yuga Ganon attacks Link, but his attack is restrained by the magic of a mysterious princess named Hilda, who informs Link that she can only hold Yuga Ganon at bay for so long and welcomes the young hero to her kingdom, Lorule.[4] She informs the young hero that she knew of Yuga's plot to abduct Hyrule's Sages and Zelda, but had failed to stop him, allowing Yuga to use them to siphon Ganon's power in order to gain enough power to destroy both Hyrule and Lorule.[5] Hilda asks Link to awaken his full potential in order to defeat Yuga by stealing back the Paintings of the Seven Sages, which have been sent to different locations throughout Lorule as a backlash from Yuga's transformation.[6]

In the first phase of the fight, Yuga Ganon attacks in a similar way to how Ganon does in A Link to the Past. Yuga Ganon frequently warps around the arena, and does so more often as he takes damage. In the first stages of the fight, Yuga Ganon mainly attacks by thrusting his Trident at Link, or slashing the young hero with it, much like a Sword. Both attacks can be avoided by running out of the way fast enough, but extra caution should be taken when attempting to attack Yuga Ganon with the Sword, as it will make Link more vulnerable to Yuga Ganon's slash attack. The safest way of hitting Yuga Ganon without getting hit is to dodge his Trident attacks, then quickly attack him from behind to avoid being struck should Yuga Ganon attack soon thereafter. Eventually, Yuga Ganon will start throwing his Trident at Link, and occasionally warp out of the arena to launch energy balls from the sky. These energy balls appear immediately above Link, so the young hero must keep running to avoid them all. Eventually, the fight will end, and the second phase will begin.

Princess Hilda casts a ring of dark magic around the room prior to the fight, preventing Wall Merging.

In the second phase of the fight, Yuga Ganon transforms Hilda into a Painting to absorb her power and that of the Triforce of Wisdom. Yuga Ganon will initiate the fight by throwing a blue ball of energy at Link, which he must reflect back at him in a game of Dead Man's Volley, in which the Net can also be used as in earlier games. After several exchanges between them, Yuga Ganon will be struck by his own magic and get stunned, then merge into the wall as a Painting. Princess Zelda, speaking from her Painting on the wall, will then give Link the Bow of Light, so he can attack Yuga Ganon while merged inside the wall. Link must merge into the wall and shoot Yuga Ganon directly with the Bow of Light. The evil beast will block the Arrow and try to stop it in its track, exposing his back. Link must take this chance to emerge out of the wall, get behind Yuga Ganon and shoot him in the back, forcing him out of the wall and rendering him vulnerable to his Sword slashes. Yuga Ganon will then warp out of the arena, and cause numerous fireballs to shoot out of the walls. These fireballs will turn into bats, which Link must avoid. This strategy must be repeated twice more during the fight, but with key differences: Yuga Ganon will respond to the second Arrow fired at him by charging violently and rapidly at him. Link must quickly emerge out of the wall and back in to shoot him before he ends the charge. The third time around, Yuga Ganon will instantly block any Arrows fired at him, and turns around too fast for Link to quickly merge behind his back. Link must then shoot away from him so the Arrow will fly all the way across the wall and hit Yuga Ganon. This will force him out of the wall one last time and render him vulnerable to the finishing move, which can be dealt with any weapon that inflicts damage.