This page is about the character. For the boss battles, see Yuga (boss).

"A fiend? How easily you stoop to petty insults. My name is Yuga. And I have come here seeking nothing less then... perfection."
— Yuga

Yuga is the main antagonist of The Legend of Zelda: A Link Between Worlds. A sorcerer who wields a staff that resembles a paintbrush, he is able to turn people into two-dimensional Portraits. It is Yuga who sets the conflict between Hyrule and Lorule into motion, hoping to steal Ganon's body and the full Triforce.

In his normal state, Yuga is a skinny Lorulian with red, braided hair. He wears a black robe with a reversed Triforce symbol on his chest, a purple cape with red trimming, blue and black puffy pants and yellow elf shoes. Overall, Yuga slightly resembles Ganondorf, with some effeminate traits seen in female members of the Gerudo, including eye makeup, diamond earrings, and lipstick.

After merging with Ganon, his body structure changes to that of Ganon's: a large muscular pig with tusks. His skin tone changes to purple and his braided hair now grows from the back of his head as opposed to the top. His clothing is tattered. Upon absorbing Princess Hilda for the Triforce of Wisdom, Yuga-Ganon becomes darker in color, and had his forearms, neck, and waist covered in spiked cuffs and black plant tendril patterns. His tusks turned red and his eyes became completely white.

Yuga is largely focused on physical perfection and beauty, often being disgusted by apparent imperfections and ugliness. He is also shown to be very arrogant, as evidenced by his interactions with Link throughout the game. In addition, after being dealt with enough damage during both his fights with Link, he also proceeded to throw a fit, stamping his foot while generating an aura in an apparent tantrum. After joining with Ganon, his motives for getting the Triforce and eventually betraying Princess Hilda are revealed to be because he felt that Lorule was "as hideous as Hyrule," and thus did not deserve to be restored to its original state. Ravio also implied in his diary that Yuga was inherently untrustworthy and a manipulator.

As expected of someone of his physique, Yuga relies mostly on his great feats of magic as opposed to brute strength. He can merge with walls as a painting, create pillars of fire on the walls, summon lightning from his staff and, while in the walls, can create duplicates of himself that transform into standard knights if attacked. Yuga also possesses a power to absorb other beings, augmenting their powers to his own.

After fusing with Ganon, he has both the Triforce of Power and Ganon's Trident. He can also levitate and shoot balls of energy that link can send back at him with the Master Sword, much like Agahnim, in a form of Dead Man's Volley. Unlike Agahnim, Yuga-Ganon can shoot a second one at Link in an attempt to throw him off.

Sometime after Lorule's Triforce was shattered by the Lorulian Royal Family, Yuga convinced Princess Hilda to try and steal Hyrule's Triforce to restore their own. Ravio suspected that Yuga was a "leech" and trying to dupe Hilda, but was unable to try and talk her out of it, thus forcing him to use what little magic he had to go to Hyrule in an attempt to avert their plan.

Link first meets Yuga in the Sanctuary. After the young hero hears Seres's cry from inside the Sanctuary and its doors are sealed shut, he enters through a hidden passageway, only to see Yuga transform Seres into a painting. Link attempts to attack Yuga, but the evil sorcerer swiftly turns into a painting himself and hides in the wall, causing the hero to crash into it. Yuga then leaves with Seres's painting, taunting Link about his weakness and ugliness.

It is soon revealed that Yuga is after the descendants of the Seven Sages as well as Princess Zelda in order to revive Ganon. Yuga heads to the Eastern Palace with the intention of finding Osfala, another descendant of the Seven Sages. Link follows suit, but once again arrives too late to stop the evil sorcerer from transforming Osfala into a painting and kidnapping him. Yuga attacks Link, deeming him a bother and an eyesore, but is soon overpowered by the young hero. In retaliation, Yuga casts a spell on Link and turns him into a wall painting as well, then leaves, unaware that the young hero managed to break free thanks to Ravio's Bracelet.

Yuga then travels to Hyrule Castle, where he manages to take control. Yuga forms a barrier that prevents anyone from entering or exiting the castle, ensuring him control over Zelda. He then wanders Hyrule in search of the remaining sages: Irene, Gulley, Impa, Rosso, and Oren. He eventually finds them, transforms them into paintings one by one, then returns to Hyrule Castle to add Princess Zelda to his collection. He corners her and transforms her into a painting, but then sees Link, who has obtained the Master Sword and is ready to fight him again. Yuga summons soldiers to fight Link and attempts to flee, but Link soon catches up to him. Angry at Link's interferences, Yuga attacks him, but is defeated. Yuga retreats to Lorule through a crack in the wall, and manages to reach the Lorule Castle throne room in time for him to revive Ganon using the paintings of the Seven Sages. He then joins with Ganon, obtaining the Triforce of Power in the process. Just as he is about to slay Link with his newfound power, Princess Hilda appears and saves him, restraining Yuga.

After Link reaches the Lorule Castle throne room again, with the Triforce of Courage, Hilda reveals that Yuga kidnapping the Seven Sages, the revival of Ganon and Link saving the Seven Sages was all part of her plan to use Hyrule's Triforce and restore Lorule to its former glory. She demands that Link hands over his piece of the Triforce, absorbs Zelda's Triforce of Wisdom, and summons Yuga-Ganon to attack the young hero. When Link once again proves more than a match for the evil beast, Hilda demands that Yuga gives his own piece of the Triforce, but Yuga-Ganon answers that he does not care about what happens to Lorule anymore, and only cooperated with Hilda in order to obtain the Triforce himself, and rebuild the worlds in his image. He transforms Hilda into a painting and absorbs her power, using it to assume an even more powerful form and fights Link one final time. However, the young hero, due to the Bow of Light supplied to him by Zelda, proves to be too powerful for even Yuga-Ganon to defeat, and the evil beast is slain, obliterating Yuga, and temporarily stopping Ganon's return to Hyrule until his eventual revival in The Legend of Zelda as well as restoring Hilda and the Triforces of Wisdom and Power.

Yuga's name is derived from the Japanese Kanji 油画/Yuga (meaning oil paintings), referencing his ability to turn people into paintings. 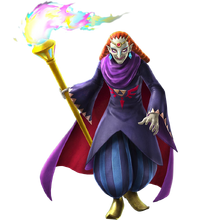 "Legend tells of two worlds that intersect. In A Link Between Worlds, the hero traversed these mirrored worlds to protect the sacred Triforce. He uncovered a sorcerer's plot to revive the Demon King. This sorcerer tirelessly sought things of true beauty across both worlds. With the unique power to turn people into paintings, he did just that to the seven sages' descendants, capturing them one by one. In battle he hides within a beautiful picture frame while his illusory attacks blindside enemies. He can summon a massive spear from the frame to pierce his enemies' defenses and to wipe the field clean."
— Yuga, Sorcerer of Lorule Historical Entry Tutorial Bio

As part of the A Link Between Worlds DLC, Yuga appears as a new playable character. Yuga fights by wielding Picture Frames and his paintbrush staff. He can also summon Ganon's King of Evil Trident during certain attacks.

Aside from this, his Yuga Ganon form is alluded to as Ganondorf's costume in the A Link Between Worlds DLC.

Some may believe that Yuga may be the Lorulian counterpart of Ganondorf. Evidence for this theory is Yuga's physical appearance, which is similar to that of Ganondorf in The Legend of Zelda: Ocarina of Time and The Legend of Zelda: Twilight Princess. Ganondorf and Yuga are also the only two characters to have no known counterparts, and the Lorulians also seem to be the opposite of their Hylian counterparts (such as Ravio being cowardly in comparison to Link being courageous). This fits with Yuga and Ganondorf, as Yuga has no power of his own and relies on his staff, while Ganondorf's powers come from himself. Similarly, Yuga and Ganondorf have slightly different motives: Namely, Ganondorf was content with conquering the world as is, while Yuga wants to go as far as to destroy the entire world and recreate it in his image as a god.

His appearance in Hyrule Warriors seems to support this, as like most DLC characters (which do not drop their own personal materials for forging) with ties to pre-existing characters, Yuga will drop Ganondorf Materials when defeated in battle.

If Yuga is Ganondorf's counterpart, then he is likely a Lorulean Gerudo. 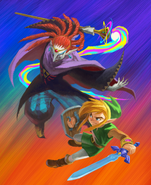 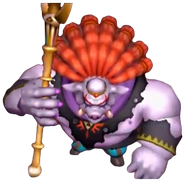 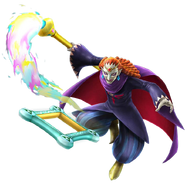 8-Bit Yuga Adventure Mode sprite from the Hyrule Warriors series
Add a photo to this gallery
Retrieved from "https://zelda.fandom.com/wiki/Yuga?oldid=540913"
Community content is available under CC-BY-SA unless otherwise noted.