Zelda Wiki
Register
Don't have an account?
Sign In
Advertisement
in: Pages Using Names and Having Translations Stored, Hylians, Hyruleans,
and 3 more
English

It has been suggested that this article or section be merged with Hero of Time.

Template:Character Young Link embodies the child stage of Link's life in the Ocarina of Time adventure and is the primary protagonist in Majora's Mask. Young Link is advantageous over his adult form in that he can access certain small passages and crawl spaces, as well as the ability to equip and utilize key items unusable by Adult Link, such as the Slingshot and the Boomerang. Despite this, Young Link lacks the fighting power of his later self, as well as access to Adult Link's equipment, such as the Hookshot and the Silver Gauntlets. Young Link is also an unlockable character in Super Smash Bros. Melee.

Ocarina of Time is the first of the Legend of Zelda series where Link's age is actually specified as "young", rather than indirectly implied adulthood. Just like his adult self, Link does not speak unless he is asked a question, the only time he actually says anything is when Young Zelda asks him of his name; his reply is the only green-lettered response in the game. At the beginning of the game, he befriends a fairy named Navi, who becomes his companion and helps him throughout his journey to save Hyrule from the clutches of Ganondorf.

It is Young Link that establishes the relationships that will come to his benefit in his adult years, after pulling the Master Sword from the Pedestal of Time. Young Link is the one to establish his beneficial and plot-necessary relationship with Saria, and Mido's dislike for him can be attributed to this in addition to the Great Deku Tree's favor for him over anyone else, namely Mido himself.[1] Young Link also strikes up a friendship with Princess Zelda, and indirectly with Impa as well, while conversing with her about Ganondorf and the fate of her kingdom in the Hyrule Castle coutryard, after vanquishing the parasite from the Great Deku Tree. In helping Darunia reopen the Dodongo's Cavern, and saving Princess Ruto from the depths of the stomach of Lord Jabu-Jabu, Young Link had, unbeknownst to him, met and aided almost all of the future Sages who would, in turn, help him in his quest to save Hyrule from the Evil King Ganondorf in the young hero's adult years.[2][3] Even after returning to his childhood for the second time, he continues this by befriending Nabooru by agreeing to aid her in overthrowing Ganondorf. He is also the one that forms the intal bond with Epona and Malon. 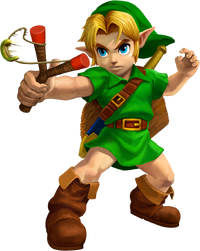 Interestingly, the dungeons of the Young Link era are all similar in theme to the temples he must face seven years down the road (i.e the Forest Temple is akin to the inside of the Great Deku Tree), yet are much more proportionate in respect to his strength, size, and skill set. If anything, the dungeons Young Link must complete are likely to be strength and skill tests in preparation for the temples he will face later, after he pulls the Master Sword from its pedestal in the Temple of Time. Not only are these dungeon puzzles easier, but the entire dungeon scope is smaller and shorter - however, Young Link is not going for Medallions in respect to the completion of these dungeons, but Spiritual Stones, items that will provide him passage into his adult years.[4][5] The Spirit Temple is the only temple in the game that Young Link visits and completes (at least, his section), and the only one whose dungeon treasure he does not directly benefit from.[6][7][8] After completing the left side of the temple, he receives the Silver Gauntlets,[6] enabling him to return to the temple as an adult and complete the previously closed-off right side; the Gauntlets can only be worn by Adult Link, and must be used to relieve the temple's right side from a large black rock blocking its entrance.

Because Young Link is a child, he can only equip and wield items that can be proportionally held and used in respect to his strength and small stature. Young Link can only carry these items while in this form in Ocarina of Time:

150px
Link and Tatl in their Majora's Mask appearance.

In Majora's Mask, Young Link appears as the primary character of the game. Although Link is as young as he was in Ocarina of Time, he now possesses several abilities the former Young Link did not possess, such as an adult wallet, the ability to ride Epona, Bow and Hookshot usage; he can still use the Ocarina of Time like he could in Ocarina of Time, and much of his weaponry from the previous title. Since Adult Link does not appear in this title, the characteristics of Young Link are not seen as unique as they were in Ocarina of Time, since he is the only player-controlled character in the game (with the exception of a brief instance in Sakon's Hideout where Kafei can be controlled).

The story tells of Young Link who, after beating Ganon and returning to his childhood, spends some time with Princess Zelda, before he leaves Hyrule in search of Navi.[9][10] As he drifts along in his adventures he comes along a dark being known as Skull Kid. It seems Skull Kid has pulled the moon from its orbit and set its course to crash into Termina, and at the same time placed a spell over Link to become a Deku Scrub. He befriends one of the Skull Kid's fairies, a stubborn fairy girl named Tatl, who accompanies him throughout his journey and eventually ends up growing a liking to the young hero. After removing the spell, Link finds out who the Skull Kid actually is and what is happening around him. He begins to take action as soon as possible, helping people, and freeing the Four Giants whom he brings to stop the incoming moon. At the end of the game Link never finds his friend, but the world of Termina is safe at last, and Link is free to move on with his life as he bids farewell to Tatl and the Skull Kid.

A facet of the Young Link of Ocarina of Time that returns in full force in Majora's Mask is the wearing and usage of masks as a plot device. See Deku Link, Goron Link, Zora Link, and Fierce Deity Link for more information. 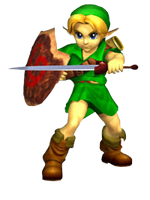 Young Link is an unlockable character in Super Smash Bros. Melee.[11] There are two ways to unlock him: 1) Play 500 Vs. matches, or 2) Complete Classic Mode with 10 different characters, including Adult Link and Zelda, at any difficulty/stock. The player will then be challenged by Young Link, and upon defeating him, Young Link will become a playable character. His appearance is based on the young counterpart of Link as seen in Ocarina of Time, since he wields the Kokiri Sword and the Deku Shield during combat. Young Link is more agile albeit weaker than the older Link. He has some of the same weaponry and moves as his adult counterpart, but they are usually accompanied with a few changes, like his Hookshot and Boomerang having a shorter reach. Great Bay serves as the home stage of Young Link.

Like Adult Link, Young Link can choose different color tunics: the Red, Blue, and Black Tunic, as well as the Blue Ring Tunic from the original The Legend of Zelda. When he taunts his foes, he drinks a bottle of Lon Lon Milk then wipes his mouth.

Young Link does not appear in Super Smash Bros. Brawl since he is replaced instead by Toon Link.