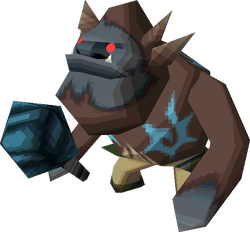 Isle of Frost
Temple of Ice

Bombs
Sword
Yook are a hairy, club-wielding species who live on the Isle of Frost in Phantom Hourglass.[1]

The Yook had bitter struggles with their enemies, the Anouki, but formed a peace agreement 100 years before the events of Phantom Hourglass.[2] Now, the Anouki inhabit the western side of the island, while the Yook live in the Great Ice Field on the eastern side of the island.[3] They will attack anyone they consider a threat but possess the fatal flaw of sucking in large breaths of air. This allows Link to throw a Bomb in their mouths, which will temporarily stun them and make them vulnerable to attack.[4] Some Yook have white hair, but others have brown hair. White ones will defend more and attempt to inhale more often, but brown ones swing with their club more and are generally better fighters.

During the events of Phantom Hourglass, a brown-haired Yook invades the western side of the island, kidnapping the Anouki Aroo and stealing his identity.[5] This event re-sparks a strong hatred among the Anouki for the Yook.[6][7] After Link defeats Gleeok in the Temple of Ice, the Yook claim that they were mind-controlled, and they become more peaceable from then on, some even apologizing to Link for their hostility.[8][9][10] Afterward, they speak civilly to Link.[11][12]

The English name "Yook" potentially comes from the Yuk- part of their Japanese name, ユキザル (Yukizaru).