Zelda Wiki
Register
Don't have an account?
Sign In
Advertisement
in: Breath of the Wild Pages with Invalid or Missing Terms, Gerudo Highlands, Hideouts,
and 2 more 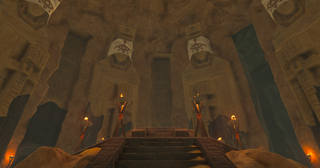 Yiga Clan Hideout is a location in Breath of the Wild.[1]

Yiga Clan Hideout is located in the Gerudo Highlands and what remains of a Gerudo temple that was reclaimed as the secret base of the Yiga Clan and their leader, Master Kohga. It is hidden at the end of the Karusa Valley in the Gerudo Desert. Link must go there in order to recover Riju's stolen Thunder Helm as part of the "Divine Beast Vah Naboris" Main Quest. Before entering, Link will find himself in a circular chamber full of Torches. From here he will see several sets of stairs and cloth banners around him. He can burn the banners to reveal the objects and enemies behind them. Behind one of the banners is the entrance to the Yiga Clan Hideout.

Once inside, Link will meet an imprisoned Gerudo soldier named Barta who gives Link a hint about the Yiga Clan's affinity for Mighty Bananas.[2] Link must sneak past all of the patrolling Yiga Blademasters in the hideout to reach the end, who carry out torches as well armed with their signature Windcleaver. Should a Blademaster spot Link, he will whistle, shutting the doors, alerting all other Blademasters in the room and summoning two Yiga Footsoldiers with Duplex Bows. When this happens, all Blademasters drop their torches, which can Link can pick up if he is in desperate need of a weapon. This can happen in both rooms, meaning Link may fight up to seven Blademasters and four Footsoldiers inside the hideout as there are two Blademasters in the first room and five in the second. The Blademaster ranged Windcleaver attacks and Footsoldier arrows function normally, but should Link be struck directly with the blade of a Blademaster he will instantly die regardless of the number of hearts he has and whether he has fairies in his inventory or posses the blessing Mipha's Grace. He will be warned of the Yiga for underestimating them, given a Game Over, then sent to the start of the Yiga Clan Hideout.[3]. Link can use Mighty Bananas to lure the Blademasters and sneak past them when they are not looking. After sneaking past the first Blademaster, Link will encounter another one in the next room guarding an open doorway. There is a treasure chest in this room containing a sapphire. Two Mighty Bananas can be found sitting on wooden platforms on the walls, which can be shot with arrows to make the bananas drop down and lure the Blademaster.

Through the doorway, if Link continues forward he will find a ladder that leads up to an upper walkway to the side a large room with several Blademasters guarding the area. At the end of the walkway, he will find a small room with a treasure chest containing a topaz and a table with 18 Mighty Bananas, serving as plenty of stock for luring Blademasters. In the large room, Link will find more wooden platforms that he can burn to cause Mighty Bananas to drop. There is also a ladder which leads another set of central upper walkways in the room which gives Link a wider variety of sneaking strategies. Link may also hide under the Barrel present in the room to sneak by. There is a treasure chest containing a Silver Rupee on the central platform with a Yiga Clan symbol on it. There are also three large cloth banners hanging on the eastern wall. Link can burn them with Fire Arrows and will find two treasure chests each containing a Gold Rupee in a secret room behind the middle banner. Link can also find a ladder in this secret room which leads to a back entrance to the central upper walkways, with another chest containing a topaz above the doorway. Once Link successfully sneaks past the Blademasters and through the open doorway to the east, he will find himself in a small room with a treasure chest in the center which contains Mighty Bananas. Link will also find three treasure chests buried in the ground nearby which requires him to use Magnesis to retrieve each one of them. Two of the chests contain a topaz with the other one containing a ruby. To proceed, Link must use Magnesis on the wall to the east to reveal a secret exit.

Through the secret exit, Link will find himself outside of the Yiga Clan Hideout in an open area with a large pit in the center. He is then face-to-face with the Leader of the Yiga Clan, Master Kohga. Kohga will recognize that Link is the person he and his clan have been looking for and initiate a battle.[4] After defeating Kohga, he will use his magic to perform his "secret technique," summoning a very large, spiky metallic Yiga ball, which rolls backwards and knocks him into the large pit nearby.[5] While falling down the pit, Kohga is heard yelling that he shall be remembered and the Yiga Clan will track Link to the ends of Hyrule.[6] Because of this, Yiga encounters in the Overworld will become more common. A treasure chest will then appear containing the stolen Thunder Helm that Link came for. It will give Riju the power to withstand Divine Beast Naboris' Lightning and protect Link from it so that he can enter Naboris.[7]

In Hyrule Warriors: Age of Calamity, the Yiga Clan Hideout's location is discovered after using the Sheikah Slate and Sheikah Towers. In the Scenario "Destroy the Yiga Clan!," the Four Champions Urbosa uses Divine Beast Vah Naboris in order to smash through into the Yiga Clan Hideout, which is much bigger than in Breath of the Wild, and filled with traps, such as extending spikes and floor spikes. Link and his friends then attack the Yiga trying to defend their base, and ultimately force Master Kohga and Sooga to flee.