Zelda Wiki
Register
Don't have an account?
Sign In
Advertisement
in: Enemies, Sheikah, Enemies in Breath of the Wild, Enemies in Hyrule Warriors: Age of Calamity 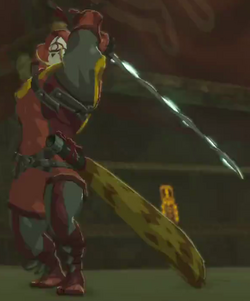 Yiga Blademasters are the elite soldiers of the Yiga Clan.[2] They can be found patrolling the Yiga Clan Hideout, and if they spot Link in the hideout, they will close all doors and exits while calling in back up. After Master Kohga is defeated, they will also start appearing randomly to attack Link.

Yiga Blademasters attack with Windcleavers that send blasts of air at long distances. They can also create fissures that produce updrafts that Link can use to glide before a stone pillar emerges from them. A shot to the head with the Bow can stun Yiga Blademasters, opening them for attacks. When defeated, they flee while leaving behind their Windcleaver and Mighty Bananas. After defeating Master Kohga, Yiga Blademasters will randomly appear all around Hyrule attempting to assassinate Link.

During the Side Quest, "The Stolen Heirloom", Link must defeat a Yiga Blademaster in order to retrieve the heirloom that grants access to the Lakna Rokee Shrine.[3]

Yiga Blademasters appear in Hyrule Warriors: Age of Calamity as Captain ranked enemies. They fight the same way as in Breath of the Wild, though their Weak Point Gauges can be exploited with the Sheikah Runes. They also speak, similar to the Yiga Footsoldiers, in instances such as when they are defeated in battle.[4] After Astor uses the souls of some Yiga Footsoldiers to revive the four blights, Master Kohga and Sooga turn against him. The rest of the Yiga Clan then follow suit, using the Hyrulean Army to exact vengeance on Astor.