It has been suggested that this article be moved to Yiga Clan. 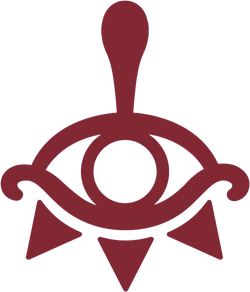 The crest of the Yiga Clan

Breath of the Wild
Hyrule Warriors: Age of Calamity

Master Kohga
Sooga
Dorian (formerly)
The Yiga Clan,[1] or simply known as the Yiga,[2] (pronounced /ˈjiː.ɡə/ YEE-ghə) are a recurring clan of Sheikah assassins and thieves.

The Yiga Clan mainly consist of Yiga Footsoldiers and Yiga Blademasters. They are known for stealing information and supplies from the Gerudo Tribe.[citation needed] Their base, the Yiga Clan Hideout, can be found in the Gerudo Region up north through the Karusa Valley. The Yiga Clan's symbol, usually found on their wooden masks, is the Eye Symbol of the Sheikah flipped upside-down as a symbol of rebellion against the Sheikah Tribe and its ideals. They all have black hair, in contrast to the white hair prevalent among other Sheikah, showing the many thousands of years have led to diversity within the race.[1] Outside of their Hideout, Yiga Clan members can randomly appear to attack Link when Link has either spoken to Impa or defeated Master Kohga. Upon Master Kohga's defeat, the Yiga become more prominent than before and wield stronger weapons.[3][4] The Yiga will also sometimes disguise themselves as travelers, only to attack Link when he speaks to them.[5] While sneaking around in the Yiga Clan Hideout, Link can take advantage of their love for Mighty Bananas by luring them with the fruit.[6] Members of the Yiga Clan fight exclusively with weapons of the Yiga Clan Gear equipment archetype, of which they are the only source. Yiga Footsoldiers use either Vicious Sickles or Duplex Bows, and will begin to carry Demon Carvers after Master Kohga's death. Blademasters instead use two-handed blades known as Windcleavers.

In Breath of the Wild, the Sheikah are described as an advanced civilization whose power and wisdom had saved the land of Hyrule multiple times.[7][8] After the first Great Calamity though, about 10,000 years ago, their technological power came to be viewed as a threat to the kingdom and thus put them at odds with the King and the people.[9][10][11] Then, the Sheikah were exiled. Some of them decided to cast off their technological advances and strove to live normal lives, while others fostered a hatred towards the kingdom that shunned them and swore allegiance to Calamity Ganon. The latter Sheikah banded together and formed a militant group. Just over 100 years ago, this group formally became the Yiga Clan, when the return of the calamity was inevitable.[12][13] Their sole mission is to eliminate all who stand against Ganon.[9][13] At some point before Link's awakening from the Slumber of Restoration the Yiga dispatched spies to Kakariko Village in order to learn the whereabouts of the hero.[13] Unbeknownst to the Yiga, one spy (Dorian) fell in love and married a woman there and had two daughters, Koko and Cottla. He decided that his family was his priority, and attempted to leave the clan.[citation needed] This angered the Yiga who, upon finding out about his wife, murdered her as punishment, and forced him to continue spying as gatekeeper with his children's lives on the line. This he did; after Link speaks to Impa, Yiga footsoldiers begin appearing in the overworld, as Dorian informed them that Link was awake.[citation needed]

With Kass' reconstruction of Urbosa's Song, Link glimpses Zelda's meeting with Urbosa in Gerudo Town 100 years ago. There, the Gerudo chieftain accepts Zelda's proposition to pilot the Divine Beast Vah Naboris.[14] She is aware that the Yiga Clan were attempting to resurrect Ganon, and steal their precious heirloom—the Thunder Helm.[15] Afterwards, the two take a stroll outside the walls of town, only to be confronted with two disguised Yiga Footsoldiers. One is defeated by her swordplay and the other is defeated by Urbosa's Fury. At some point before the events of Breath of the Wild, the Yiga manage to steal the Thunder Helm.[2]

In Link's seventh Recovered Memory, "Blades of the Yiga," Zelda is attacked by a group of Yiga Footsoldiers at Kara Kara Bazaar and rescued by Link.

The Yiga and Master Kohga are first introduced as Link and Zelda recruit Urbosa. After Kohga's scheme to impersonate Urbosa and turn the Gerudo against Zelda fails, Urbosa, Link, Zelda, and Impa pursue him to the Yiga Hideout. They defeat them, but his second-in-command Sooga arrives to help him escape. Some time later, they meet with Astor, who expresses his disappointment with their failure and reminds them of their duty to ensure the revival of Calamity Ganon. Yiga Footsoldiers, just like in Breath of the Wild attack with Vicious Sickles and Duplex Bows, though some will disguise themselves as Hylian Soldiers or even members of their former tribe, nearly stopping Robbie and Purah from learning the truth via analysis of Terrako.

When Calamity Ganon awakens, Astor betrays the Yiga, using the souls of their members to empower Calamity Ganon and resurrect the Blight Ganons. They ultimately end their grudge against the Hylian royal family, joining forces with the united Hyrulean army to avenge their murdered kin.

Thieves in The Legend of Zelda series
Community content is available under GNU Free Documentation License unless otherwise noted.
Advertisement