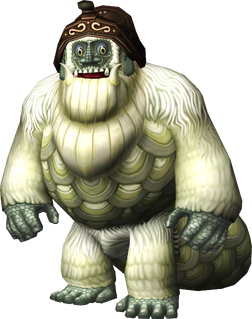 Yeto is a character in Twilight Princess.[2]

Yeto lives in the Snowpeak Ruins with his wife, Yeta, who owns a shard of the Mirror of Twilight. He helps Link reach his home by snowboarding. As his wife Yeta grows ill, he prepares a Soup for her. He needs Reekfish to make his Soup, and as such had been seen by Lake Hylia attempting to catch one. This made the inhabitants of the Zora's River suspicious as to what exactly was happening on Snowpeak. As Link explores the Snowpeak Ruins, he finds more ingredients for Yeto's Soup. By bringing them to him, Yeto can prepare a better Soup, increasing its healing properties. Link is able to scoop Yeto's Soup with an empty Bottle. After beating Blizzeta, Yeta's possessed form, Yeto and his wife hug each other, releasing Hearts and eventually a Heart Container.

Yeto and his wife can be challenged to a Snowboard Race to the Snowpeak Ruins after completing the dungeon. Beating the couple will earn Link a Piece of Heart.