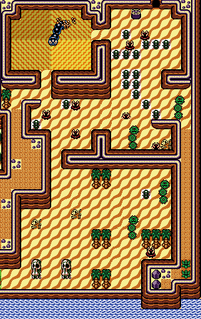 Yarna Desert is a location in Link's Awakening.[1]

The Yarna Desert lies to the southeastern side of Koholint Island. Hidden in the sands is a Lanmola that Link must defeat to acquire the Angler Key.

Yarna Desert features cactus, shifting sands, and wind-swept skulls of creatures and people. One of these skulls is ???, who, if sprinkled with Magic Powder, will tell Link to use a Bomb to open a wall leading to a Piece of Heart in the cave below the quicksand.[2] There are also huge skulls that resemble a tusked animal, indicating that the desert was once most likely a fertile locale. The desert is originally blocked by a large sleeping Walrus who only awakes upon hearing Marin sing the "Ballad of the Wind Fish." The desert is only accessible from the region to the west called East of the Bay. It also borders Animal Village to the west, and the Face Shrine to the north.

In the Link's Awakening manga by Ataru Cagiva, after taking Marin to Animal Village, Link heads to Yarna Desert. Once there, Felicia finds an abandoned house. After exiting it, Link is attacked by a Lanmola. Upon defeat, the Angler Key appears from within the creature. After clearing Angler's Tunnel, Link takes Nakuma through Yarna Desert into his house, where it rewards him with a new Sword. After the ghost's passing, Link uses his old Sword to create a grave for it.