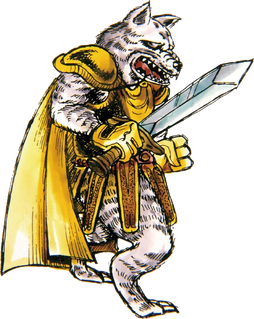 Wosu first appear in Parapa Palace, sprinting towards Link from either the left or right. Though these foes cannot jump or throw objects, they use their speed to ambush Link and a small blade-like weapon to inflict damage. Interestingly, the Wosu also saps Link's experience as it deals damage. Due to the fact that unlike many other enemies, Wosu can appear endlessly in a single location, Link cannot earn any experience by defeating these enemies. The Wosu is also one of the few enemies in The Adventure of Link that does not have a color variation or strength increase in any later incarnation; the enemy retains the same attack technique and life meter throughout the entire game.

Wosu make a brief appearance in the "Quest for the Potion of Power" episode of Captain N: The Game Master. When Link, Princess Zelda, and Kevin arrive to the Parapa Palace, they are promptly greeted by three Wosu rushing over to attack them. However, before they even have a chance to inflict damage upon the heroes, Link easily zaps the monsters with his sword.