Zelda Wiki
Register
Don't have an account?
Sign In
Advertisement
in: Eldin Canyon, Stables, Locations, Locations in Breath of the Wild 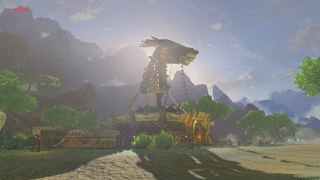 The Woodland Stable is a location in Breath of the Wild.[1]

The Woodland Stable is a Stable that is situated along the border between Eldin Canyon, Hyrule Field and the Great Hyrule Forest.[2] It sits along the road in northern Hyrule that paves between East Hyrule Castle and Eldin Canyon. Although technically part of Eldin Canyon, it is in close proximity to the woodlands of the Great Hyrule Forest, giving it its name.[2] The Stable sits right beside Pico Pond, where the Mirro Shaz Shrine is located, making it a convenient Travel Gate to the Stable. The Woodland Stable contains every amenity characteristic to Stables, including Horse services, lodging, and a Cooking Pot for Cooking. Beside the Stable is a pen that keeps several White Goats, guarded by a Hylian Retriever. On the opposite side of the pen is a deck with several tables and Barrels. A Double Axe can be found resting against a stump nearby, and a Soldier's Broadsword can be found underneath a tree north of the Double Axe. A Soldier's Spear can be found laying against the rock wall leading toward the Shrine.

The Stable is run by Kish, who mans both its Horse services and lodging. A girl at the Horse pen named Breen will also assist Link with changing his Horse's Gear or Mane. As with all other Stables, Beedle can occasionally be found here selling his wares.

An elderly worker at the Stable named Ashe assists travelers with giving directions and explaining the local area. He will give directions to Eldin Canyon, Hyrule Field, and the Great Hyrule Forest as well as their features when spoken to.[3]

The painter Pikango can be found here and directs Link to where the Recovered Memory "Subdued Ceremony" is located, at the Sacred Ground Ruins in front of Hyrule Castle to the southwest of the Stable.[4]

A child named Shamae requests that Link attaches "balloons" to one of the Barrels in front of her so that they may fly into the sky, initiating the Side Quest "Balloon Flight".[5][6] Shamae will give Link a Star Fragment as thanks for fulfilling her request.

A man named Molo seated at one of the deck's tables mentions that there are rumors of abandoned treasures and weapons to be found in Hyrule Castle,[7] and hopes to plunder it for himself despite the dangers there.[8] He also mentions that there is an Ancient Shrine located at its northern Docks, referring to the Saas Ko'sah Shrine.[9]