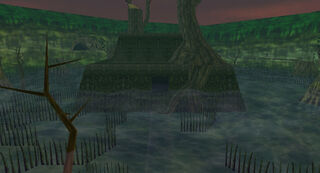 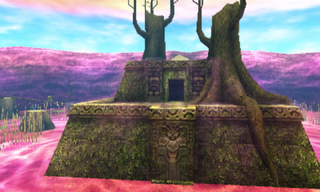 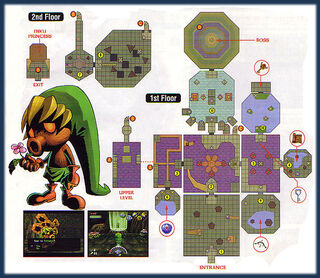 Woodfall Temple is the first Dungeon in Majora's Mask.[1]

The Temple is found deep within the Southern Swamp in the Woodfall area, through a secret passageway within the Deku Palace.[2][3] The physical face of the dungeon is hidden from view and must be revealed by playing the "Sonata of Awakening".

Woodfall Temple, in size, is significantly smaller in comparison to the other temples of Majora's Mask, however, the intricacy of its puzzles and layout make up for its size discrepancy. The Temple, as with all others in Majora's Mask, suffers from a demonic curse placed upon it, in this case by a spirit, Odolwa. The Temple's water, along with a grand portion of the Southern Swamp's volume is toxic; if Link manages to fall into it, he will take damage.

This Temple, with its forest-like theme, takes full advantage of Link's Deku form. There are several Link-Eating Plants that can only be crossed as Deku Link, as the Plants are alive and will try to eat human Link. Deku Flowers are abundant and aid in giving Link that initial propulsion into the air from which the drifting mechanisms of his Deku form can be utilized. While Deku Link sees much action in this Temple, the abundance of water below many of the platforms is enough to stop Deku Link mid-flight.

Enemies are rather few and far in-between relative to other dungeons. While Black Boes, Skulltulas, Dragonflies, and Deku Babas exist, their presence is rare. Guarding the Dungeon Map are three Snappers, and the Compass is in a room with two Dragonflies. The dungeon's special item, the Hero's Bow, is guarded by the dungeon's lone Dinofols.

Given that the Hero's Bow is the item of this dungeon, there are many puzzles that require its use. Torches and switches must be fired at with the Bow, and several Stray Fairies are hidden inside of beehives that must be shot down to reveal their contents. Oddly enough, the dungeon's boss, Odolwa, can be defeated entirely without using the bow at all, despite the tradition of most The Legend of Zelda series bosses requiring the use of the dungeon's item during battle. The Deku Mask is not required either; this is especially odd, given that the two following temples are both very Goron Mask- and Zora Mask-centric, and the two temples' bosses require the respective masks.