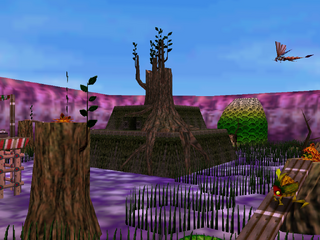 The Woodfall area is a murky bog that is located within a mountain of the Southern Swamp, which houses a crater filled with water. It is one of the most prominent landmarks in Termina, as it is both characteristic and visible from most parts of the land. Though while it is not the only source of the swamp's waters, it constantly spews water down its sides, and the state of Woodfall directly effects the environmental health of the surrounding jungle. Woodfall also plays a key role as the home of the submerged Woodfall Temple. As a result of the curse placed over the temple, the waters in Woodfall have become toxic, and so in turn have contaminated the water in the rest of the Southern Swamp. The Woodfall mountain bares a resemblance to Death Mountain from Ocarina of Time, in that it is surrounded by a ring of clouds.

The bog at Woodfall's summit is at first a deep magenta hue and is full of poisonous water too deep for Link to stand in when not in Zora form. The bog contains a large circle of tall tree stumps, some of which are connected by wooden catwalks. When a catwalk is not provided, the only way to cross to the next tree stump is by Deku Flower. Across from the entrance to the bog is a tall wooden platform held above the water by stilts. The platform carries both an Owl Statue and an altar once used by the Deku as means of worship.[1] Not too far from the platform is a Great Fairy Fountain nestled in the inner wall of the mountain. The Great Fairy of Power living there grants Link an improved Magical Spin Attack once all of her Stray Fairies from Woodfall Temple are reunited there. However, in the 3D version, the Great Fairy of Wisdom is there instead. Submerged in both the water and underlying ground at the center of the bog is the Woodfall Temple, which will only raise after playing the "Sonata of Awakening" on the Deku Altar.

Following Odolwa's defeat, the waters atop Woodfall are cleansed and become more shallow and blue. From there-on after (until the three-day cycle is reset), Woodfall remains a shade of yellow-green. This allows Link access to a hidden chamber within Woodfall that houses the imprisoned Deku Princess.

Woodfall is notable for containing a large quantity of treasure chests, one of which holds a Piece of Heart.

Woodfall was once used as a center of worship by the Deku, but was abandoned at some unspecified point in Termina's history, presumably after their guardian deity left them. When the Skull Kid began wreaking havoc in Termina, Woodfall began to churn lethal, poisoned water out of the Woodfall Temple and into the swamps below. This caused an influx in hostile wildlife, the population of which peaked in the bog on the mountain summit. This was viewed by the Deku as an omen that their doom was quickly approaching, and irrational panic quickly broke out across the jungle.

Believing the source of the swamp's problems to be the Woodfall Temple, a Monkey convinced the Deku Princess to join him in ridding Woodfall of its curse.[2] However, upon entering the temple, the princess was captured by Odolwa and the Monkey was intercepted by the angry Deku Royal Family while escaping, thinking that he had kidnapped the princess.[3]

When Link arrives in the swamp, Woodfall's cursed waters have already infected the entire swamp and its wildlife. To access the top of the mountain, he must at first use the "shortcut" used by members of the Deku Palace. This later becomes unnecessary, thanks to the Owl Statue in the bog. He learns the "Song of Soaring" on the way to the volcano summit. In Majora's Mask 3D however, the "Song of Soaring" is instead learned at the Southern Swamp entrance.

The bog itself must be crossed via Lily Pads, catwalks, and tree stumps. The only way to access any of the Deku Flowers is for Link to first slay the Mad Scrubs occupying them, and he must also spar with Hiploops that patrol the planks. Dragonflies are also present.

After crossing Woodfall to the platform, Link raises the temple by playing the "Sonata of Awakening".