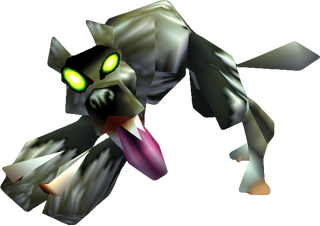 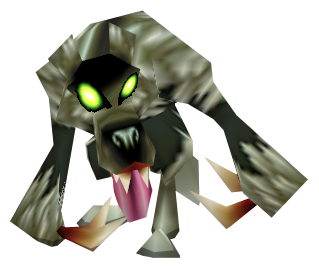 Sword
Wolfos are recurring enemies in the The Legend of Zelda series.[1]

Wolfos appear in Ocarina of Time and Majora's Mask. In terms of appearance, Wolfos are grey, anthropomorphic wolf-like creatures with green eyes that commonly appear in forest environments. Their counterpart is the White Wolfos, which is much larger and only appears in cold and snowy surroundings. In Ocarina of Time, Wolfos appear in the Sacred Forest Meadow, the Forest Temple, the Spirit Temple and Ganon's Castle. In Majora's Mask, they appear near the Southern Swamp and replace the White Wolfos of Snowhead after spring is returned to the mountain. A single Wolfos also appears in Sakon's Hideout as part of the mechanism that protects the Sun Mask.

Wolfos will emerge from the ground when approached. They fight in direct combat, and can duck down to block Link's attacks. They attack by circling Link and diving in to strike with their claws. One strategy is to Z-Target them and use the Shield constantly, then attack when it drops its guard. Another strategy is to back away when the Wolfos goes to attack, which will cause its raking claws to miss. It will then spin around, leaving its back exposed. If Link hits the tail, it will be defeated instantly.[2] Another option is to use the Hookshot or a Deku Nut to stun it, and then attack at will.

Wolfos appear in The Legend of Zelda: Ocarina of Time (Himekawa), fighting Link and Mido in the Forest Temple. More are also seen as minions of the Baku Tree.

Wolfos appear as enemies in Cadence of Hyrule where they can be found in forested areas and dungeons. Like most enemies, they can only move to the beat of the music and move every two music beats. However, they can move and attack in all eight directions, including diagonally, which can make fighting large packs of them dangerous. In fact, a large pack of Wolfos does appear within a section of the Lost Woods along with a single Black Wolfos, the latter of which always spawning near the exit where the heroes are supposed to go in order to reach the Lost Swamp.

Fortunately, they will only attack Cadence, Link, Yves, and Zelda if they're not looking directly at them. When they do look at the Wolfos, they will change their course of direction and hop away from the heroes, keeping their eyes on them at all times until they turn around or until the Wolfos moves to a position either behind or adjacent to the hero where they cannot see them.

Before moving and attacking, they will always crouch down and bare their long, saber-tooth-like fangs for one beat before hopping onto another tile, dealing damage to anyone who's standing in their way. They share this pattern with other Wolfos species, such as the White Wolfos and Red Wolfos. Their movement pattern is based on the Hellhound enemies from Crypt of the NecroDancer.