"These wolves are not only carnivorous but can also be downright fierce. They're highly aggressive and aren't afraid to attack people. They hunt in groups and surround their prey as a means of bringing it down. That said, if one of their own is injured, the rest are wise enough to run away. They communicate via howls, so if you're wandering the forest and her their call, you had best take care."
— Hyrule Compendium

Wolves are a species of mammals native to Hyrule which first appeared in The Legend of Zelda: Twilight Princess and later in The Legend of Zelda: Breath of the Wild. Though Wolves first appear in Twilight Princess, they are predated by wolf-like enemies known as Wolfos and White Wolfos variant which first appeared in Ocarina of Time though the exact relationship between them is unexplained. Additionally, a wolf's howl is used in Ocarina of Time to denote nightfall much like how the sound of a Cucco's crowing is used to denote daybreak. 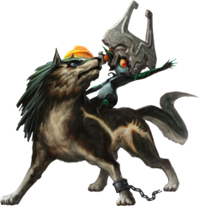 Wolves were first introduced in Twilight Princess through Link's Wolf Link transformation which occurs when he is exposed to Twilight. Shortly after his transformation, Wolf Link is captured and thrown into the dungeon of Hyrule Castle where he is saved by the Twili imp Midna and meets Princess Zelda who explains of the Twilight King Zant's invasion of Hyrule which forced her to surrender to save her people and caused Hyrule to become covered in Twilight. With the aid of Wolf Link returns to Ordon Village, but is mistaken for a monster due to his beastly appearance. Midna helps him obtain a sword and shield and he is restored to his original hylian form after collecting all of Tears of Light and restoring Light to Faron Provence. While on his way to the Forest Temple, Link is attacked by a Golden Wolf and transported to the world of Ghostly Ether which reveals itself to be an ancient deceased warrior known as the Hero's Shade, whom is actually the spirit of the legendary Hero of Time. The Shade teaches Link his first Hidden Skill and tells him to seek out howling stones. Throughout his adventure, Link makes used of both his Wolf and Hylian forms, eventually managing to obtain the Master Sword which frees him of the effects of the Shadow Crystal that had trapped him in wolf form after his and Midna's disastrous encounter with Zant. While traveling the mountains of Snowpeak, Link encounters the wolf-like White Wolfos though it is unknown if they are wolves native to Snowpeak or just wolf-like creatures that inhabit it. The Yeti Yeto is not surprised by Wolf Link's appearance and chooses not to eat him as he already caught a Reekfish for his Soup. After Link defeats Blizzeta, it is implied by both Yeto and Yeta that they occasionally eat wolves native to Snowpeak but it is unknown if they are referring to the White Wolfos or animals. Besides Wolf Link, the Golden Wolf, and White Wolfos, no other Wolves appear in Twilight Princess though it is implied by several characters that they exist in Hyrule. Most Hylians and Humans are frightened or hostile towards Wolf Link viewing him as a monster presumably due to his unique appearance which somewhat resembles Wolfos from Ocarina of Time, though some such as Coro, Iza, Agitha, Jovani, Ashei, and Princess Zelda show no fear of Wolf Link. Through Wolf Link it is shown that Wolves have keen senses that allow them to sense spirits and seen digging patches in the ground. Wolf Link can attack using his teeth and tail, as well as has a powerful jumping ability which he can use to travel up to out of the way areas with the aid of Midna. Wolf Link can also communicate with other animals even ones wolves might normally prey on. It is unknown if all of these abilities applies to all Wolves, as Wolf Link is referred to as a divine beast and thus his and the Hero of Time's Golden Wolf forms may be a divine protection of sorts. Stalhounds are implied to be either undead skeletal wolves or wolfos reanimated by dark magic.

In Breath of the Wild, Wolves appear as wild animals that can be found in certain areas of Hyrule. They can be hunted for meat and several different breeds can be recorded in the Hyrule Compendium. They are hostile toward Link and will attack him on sight. There are three species of wolf, the "Maraudo Wolf", "Wasteland Coyote", and "Cold-Footed Wolf". All three species of wolf drop high grade Raw Prime Meat and Raw Gourmet Meat, though Cold-Footed Wolves tend to drop Raw Gourmet Meat more frequently than Maraudo Wolves and Wasteland Coyotes. Maraudo Wolves are commonly found in Tabantha Frontier and Great Hyrule Forest regions, though can be found in other areas such as Akkala Highlands and Deep Akkala. Wasteland Coyote are native to Gerudo Desert and desert areas of Gerudo Highlands. Cold-Footed Wolves are commonly found in snowy areas of Gerudo Highlands and Hebra Mountains, though can also be found living on Mount Lanayru.

Wolf Link also appears as a companion for Link who can be unlocked by using the amiibo Rune and the Wolf Link amiibo. Wolf Link can attack enemies or wild animals, and assist Link in battle. Link can also feed him to restore his partner's hearts.

In both Hyrule Warriors and Hyrule Warriors Legends, Midna can summon special Wolf-like Shadow Beasts based on Wolf Link. Midna can ride them in both her Imp and Twili forms (though in the case of Twili her wolves only appear during one of her combos and during her victory cutscene).

It is unclear as to whether wolves and Wolfos are related or different species. A possibility is that Wolfos may be either a monster species of wolf, or wolves transformed into monsters by dark magic. Another possibility is that Wolfos may be spectral or demonic wolves. The White Wolfos in Twilight Princess have a ghostly appearance and may actually be the spirits of "Cold-Footed Wolves" similar to how Keatons are said to be the ghost of Foxes. This may be a reference to the japanese yōkai Ōkami, the powerful wolf spirit that either takes a person's life or protects it. Another possibility is they are simply wolf-like species of monster unrelated to wolves beyond similarities in appearance and behavior (such as howling, pack hunting, and habit of circling prey).

As the Lost Woods is said to turn adult Hylians who remain in the woods to long into Stalfos, it is possible that Wolfos encountered in the Lost Woods may be Hylians transformed into monstrous Wolves or that Wolfos are Hylians suffering from a form of lycanthropy which turns them into a Wolf/Hylian hybrid explaining their ability to stand on two legs. Wolfos may also share some connection with Link's wolf form and possibly is a corrupted version of it that effects normal Hylians who lack Link's heroic status which may offer Link a form of divine protection. Interestingly Maraudo Wolves inhabit the Lost Woods in Breath of the Wild much like how Wolfos inhabited the Sacred Forest Meadow and Forest Temple within the Lost Woods in Ocarina of Time.

The nature of the Hero of Twilight and Hero of Time's wolf forms is unclear and left unexplained though it is suggested that the form is divine in nature as Wolf Link is referred to as a divine blue-eyed beast, which fits with the Golden Wolf's otherworldly appearance though this may be due to it being the Wolf form of the spirit of the Hero of Time. Wolf Link's first transformation is suggested to be due to the Triforce of Courage protecting him from being turned into a spirit like most Light World beings when exposed to Twilight allowing him to restore light to Hyrule as well as harmful magic like the Shadow Crystal and Shadow Crystal Fog. It should be noted that Hero of Time originally possessed the Triforce of Courage, so he likely retained the ability to use the form after his Triforce piece was presumably pasted on to his descendant the Hero of Twilight. Another possibility is that it is a divine form of lycanthropy possessed by either all or some (as the Link in A Link to the Past is turned into Bunny Link instead when he first enters the Dark World) incarnations of the Hero Chosen by the Master Sword who serves as the Goddess Hylia's appointed Champion (as Hylia is largely responsible for the Master Sword's creation) that protects them from harmful magic or becomes accessible to them as a spirit and the Triforce symbol is simply a representation of its divine nature and/or related to the Mark of a Hero. Another possibility is that the Hero's spirit is naturally capable of taking on this divine form as the Twilight turns living Hylians into spirits, thus Link inadvertently takes the form in response to becoming a spirit while still technically alive while the Golden Wolf form is the result of the Hero of Time being deceased which may explain his ability to change between his wolf form and ghostly Hero's Shade form without the use of the Master Sword or Shadow Crystal, though his ability to control it may be due to his experiences various transformation as a result of his adventures in Majora's Mask.

Wolf Link on the Great Plateau in Breath of the Wild
Add a photo to this gallery
Retrieved from "https://zelda.fandom.com/wiki/Wolf?oldid=544733"
Community content is available under CC-BY-SA unless otherwise noted.