This article is about Wizzrobes who appear as Bosses. For the enemy, see Wizzrobe. 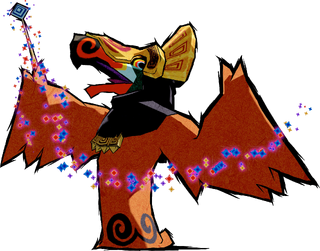 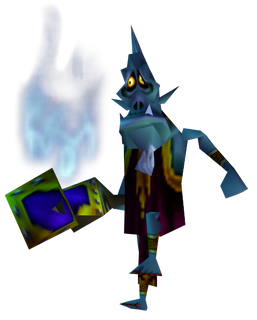 The Wand of Gamelon
Battle Quest

Wizzrobes are recurring Sub-Bosses in The Legend of Zelda series.[6][note 1]

In Majora's Mask, Wizzrobes are cruel spellcasters that resemble goblin-like old men who wear simple cloth and carry a staff.[1] One appears as the Mini-Boss of Snowhead Temple, another appears in the Ancient Castle of Ikana, and a third appears in the Stone Tower Temple. A fourth Wizzrobe also appears in the Secret Shrine.

Wizzrobes are encountered in rooms with pads across the room, which they teleport between before eventually stopping to dance and cast an attack.[1] Link must attack it while it is dancing before it can cast its spell. This is easiest with the Hero's Bow, especially in later Dungeons where it emerges from a pad that is out of reach. After enough damage is dealt,[how many?] it creates illusionary copies of itself that rush around the room.[1] To defeat the Wizzrobe, Link must find the real one and attack it before it can strike back. As only the real Wizzrobe will attack, it can be found by looking for the one that is dancing. The real Wizzrobe also appears on the Map. Tatl can also target the real one if Link is close enough.

The Wizzrobes that appear in Snowhead Temple and the Secret Shrine cast Ice magic, whereas the Wizzrobes in the Ancient Castle of Ikana and Stone Tower Temple wield Fire magic.[8] The battle in the Stone Tower Temple also involves fiery rocks that fall from above. Link can use the Mirror Shield to reflect their spells. Defeating the Wizzrobe in Snowhead Temple rewards Link with the Fire Arrows,[2] and defeating the one in Stone Tower Temple reveals a Treasure Chest containing a Stray Fairy.[4] The Wizzrobe in the Secret Shrine leaves a Treasure Chest with a Silver Rupee.[3] Once it is defeated, along with the other three Mini-Bosses in the Secret Shrine, Link receives a Piece of Heart. The Wizzrobe in the Ancient Castle of Ikana does not leave a Treasure Chest when beaten, however defeating it makes it possible to proceed to the roof, where it is possible to blast a hole with a Powder Keg to let sunlight in.

In The Wind Waker, a more powerful version of the regular Wizzrobes appears as the Wind Temple's Miniboss. It wears an orange cloak and an Incan-like crown. It has the power of summoning other Wizzrobes,[9] as well as other enemies such as Darknuts, Kargarocs, Keese, Moblins, Morths, and Peahats.[10]

They can be defeated in a single hit if they are frozen with an Ice Arrow and then tossed at a wall, crushed with the Skull Hammer, or shot with a Fire Arrow.

In The Wand of Gamelon, a Wizzrobe appears as the fourth Boss. He appears as a green-skinned wizard wearing a purple robe and is located in the Shutoy Lake tower, where he is holding Lady Alma captive.[11] In defiance, Lady Alma says that she is not afraid of him, to which Wizzrobe responds by casting a spell that buries her in stones.

Wizzrobe casts magic spells at Princess Zelda, and cannot be attacked by normal means. He can only be defeated by reflecting his disintegration spell back at him using the Reflecting Shield. Upon his defeat, he drops a Small Key that opens the door to the chamber where Lady Alma is imprisoned.

In Battle Quest, Wizzrobe resembles a giant bird with torn clothing and first appears as a Boss in Death Mountain Climb. It throws Keese at the player, and then a ball. The swordsmen have to swipe their Swords at the ball to volley it back. The ball will change color, which means it will go to a different swordsmen. Once the ball has been volleyed enough,[how many?] it deals a hit. The archer can also hit Wizzrobe with Arrows to deal damage.