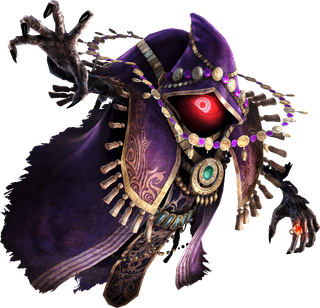 Wizzro,[name reference needed] also known as the Dark Wizard,[1] is an antagonist in Hyrule Warriors. In the version 1.3.0 update, he is also a playable Warrior.

He is an evil wizard with powers of dark magic, which he controls with the ring that gives him essence. His powers allow him to manifest blasts of energy, as well as to shapeshift and disguise himself as other people. Wizzro enjoys causing mayhem and destruction in his battles, though he has a tendency of blindly turning to others in power.[2]

Wizzro attacks with powerful black magic in battle. His powers allow him to manifest the energy into power blasts of dark magic, which include a variety of abilities such as creating and firing streams of fire balls, firing a laser beam blast, creating explosions of dark energy, and summoning serpent-like creatures with a single eye. He can also summon large Floormaster-like hands to grab and slam enemies with, or transform his own arm into one. He can also use his powers to emerge into shadow and reappear close to his enemies, or to retreat.

Wizzro's signature class of Weapon is his Ring, which is what grants him his dark powers. The Ring's three tiers are based on the Blue, the Red and the Green Rings of The Legend of Zelda and Oracle of Seasons and Oracle of Ages. The Weapon is of the Darkness Element.

As an enemy Warrior, Wizzro also possesses the ability to shapeshift into other Warrior characters, and allows him to use their same abilities. His disguises are slightly discolored however, and appear more dull and grayish to be easily distinguished from the real characters.

When defeated in battle as an opponent, Wizzro may either drop his Robe as a silver Material, or his Ring as a gold Material.

Wizzro is a companion of the sorceress Cia, with whom he rages war onto the Kingdom of Hyrule. Wizzro was originally a cursed ring that, over many centuries, had lured its victims into wearing it, allowing it to absorb their essence and condensing their deceased souls into a single, malevolent spirit. He was reborn as a sorcerer by Cia's dark magic.[2][3]

Wizzro is first encountered by the Hyrulean Forces when the Dark Forces invade Hyrule Field. He commands the enemy troops from the Enemy Base, and leaves the battle shortly after releasing King Dodongo.[4][5] The beast, however, is only meant as a distraction, and the Hyrulean Forces later find that the castle has been seized and Princess Zelda has gone missing.[6] Wizzro is then shortly encountered again at the Eldin Caves, as one of the enemies stopping the progression of the Bombchus.[7] However, he is defeated and retreats from the battlefield.

Wizzro makes a third appearance at the Faron Woods, again commanding his troops from a faraway Keep. He retreats again when his Keep is reached, and summons Gohma to attack the Hyrulean Forces.[8] Gohma is defeated, and the Dark Forces lose the forest base.

After Cia opens the Gate of Souls to the different eras, Wizzro secretly leads the Dark Forces in Lake Hylia where one of the newly opened Gate of Souls stands. He transforms himself under the disguise of Princess Zelda, and causes a conflict between the Gorons and the Zoras by tricking Darunia into kidnapping Princess Ruto.[9][10] Impa and Sheik bring Darunia to his senses and rescue Ruto, and together the group travel to Lake Hylia to face the mysterious Princess Zelda. Under the disguise of the princess, Wizzro lowers the Morale of the Hyrulean Forces, but Impa insists that the doppelganger cannot be the real Princess Zelda. Ruto helps to open the floodgates to the Water Temple and find the Mirror of Truth. Princess Zelda is later defeated inside the Water Temple, and Sheik shines the Mirror of Truth on her to reveal that she is actually Wizzro in disguise. His plans now foiled, he retreats along with the Dark Forces, allowing Impa and the real Princess Zelda (who was masquerading as Sheik) to close the Gate of Souls there.

After the three Gate of Souls are closed, the Hyrulean Forces then travel to the Temple of the Sacred Sword to retrieve the Master Sword to defeat Cia with. Unbeknownest to them, Wizzro is there and the Allies are attacked by the Ghost Forces defending the temple. Zelda soon feels an evil presence nearby, which Proxi confirms her suspicions and feels there is an impostor among them.[11] Link finds an impostor Lana who is controlling the Ghost Forces,[12] and defeats her, thus freeing the Ghost Forces from their control. Wizzro, still under the disguise of Lana, swears he won't let Link win and momentarily disappears.[13] He shortly reappears after Link acquires the Master Sword, and tries to attack Link from behind with a blast of dark magic. But Link deflects it with his new sword, and fights Wizzro. During their fight, Wizzro demands he be given the Master Sword,[14] but is told by Zelda that it cannot be wielded by evil.[15] He then teleports himself outside of the temple walls, as the location is blocking his full powers,[16] and calls for more enemy reinforcements. Link however finds the wizard and defeats him. Wizzro is forced to surrender and reveals Cia's location at the Temple of Souls.[17]

In the Master Quest DLC pack, Cia and her army's backstory and point of view are expanded on by additional Scenarios.

Cia first encounters Wizzro in the Eldin Caves while looking to enlist Volga. Wizzro's ring had been sealed in the caves and was protected by the Goron Forces. When Cia invaded the caves to recruit Volga for her crusade, the panicked Gorons believed her to be looking for the malevolent artifact, thus accidentally giving away its existence to an intrigued Cia. Her powers breathed new life into the ring, allowing it to be born as the twisted wizard, Wizzro, who quickly swore allegiance to Cia. Wizzro assisted Cia in repelling the Gorons, but when he learned of her plan to subjugate Volga in order to grow her power, his greed led to him attempting to betray her and take Volga for himself. However, Cia easily beat him back into submission, while also securing Volga's service, and Wizzro soon left the caves with his new master and fellow servant

En route to Hyrule Castle, Wizzro advises Cia to eliminate the main obstacle to her ascendancy: the Fairies. Cia works to capture the majority of the fairies, but a few escape thanks to Lana and the Gorons. Unwilling to be distracted from her main goal, Cia dispatches Wizzro and Volga to take out the stragglers. The pair chase their prey to Hyrule Field, where the Dark Forces attract the ire of the Hyrulean Forces. Although they manage to scare off Lana, the Hyrulean Forces would soon regroup and respond in earnest with Impa and the promising knight Link at their head.

After Cia opened the Gate of Souls to the different eras, Wizzro accompanied Cia along with Volga to recruit Zant and Ghirahim into their forces. They manage to defeat them both and form an alliance.

In the Valley of Seers, shortly before the rest of the Hyrulean Forces arrive to put a stop to Cia, the Dark Forces fight the still incomplete Ganondorf and his force. Wizzro takes the opportunity to defect to Ganondorf's side, but is once again defeated by Cia, who punishes him this time by sealing him back into his ring.

Wizzro's name is derived from Wizzrobe.