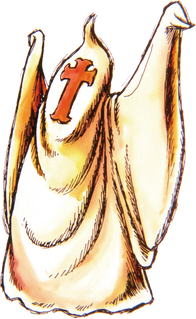 100
Wizards are enemies in The Adventure of Link.[1]

Wizards appear and disappear while firing magical attacks at Link. They are impervious to the Sword and can only be defeated by reflecting their magic back at them using the Reflect Magic.[2] They appear in the Maze Island Palace and Three-Eye Rock Palace.

Wizards were Wizzrobes that once served the King and Prince of Hyrule, but were banished for putting Princess Zelda to sleep.[1]