Zelda Wiki
Register
Don't have an account?
Sign In
Advertisement
in: Locations in Oracle of Ages, Koholint Island, Labrynna,
and 6 more 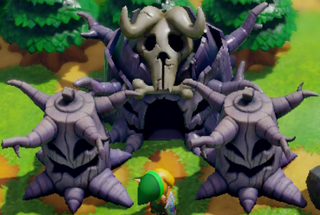 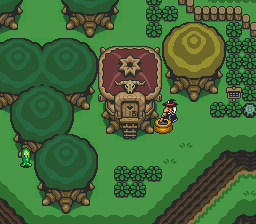 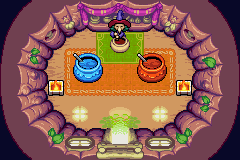 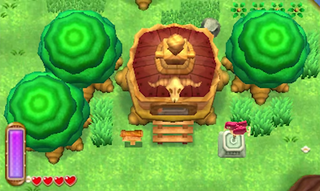 A Link to the Past
Hooded Shopkeeper

The Magic Shop is located in the northeast region of the Light World in A Link to the Past. It is the home of an unnamed witch who brews Potions outside, and a shopkeeper who maintains the shop inside. They brew and sell Magic Potions in three varieties: Red Potion, Green Potion and Blue Potion. If Link brings the witch a Mushroom and waits for a while, she will produce Magic Powder and leave it for him in the shop. The shopkeeper will offer a Link a free sample of the Red Potion, refilling his hearts on the spot.

In A Link to the Past & Four Swords, the generic shopkeeper inside was replaced by Maple.

The Witch's Hut also appears east of the Mysterious Woods on Koholint Island in Link's Awakening. Provided Link brought the witch a Sleepy Toadstool, she gives him Magic Powder.

In Oracle of Seasons, Syrup's Potion Shop is located in the middle of the Sunken City and can only be accessed in winter, when the water has frozen. Syrup do not sell anything here until Link trades her a Mushroom for the Wooden Bird.

In Oracle of Ages, Syrup's Potion Shop is located in the north-eastern corner of the Yoll Graveyard, in the present. Here, Syrup sells Magic Potions, Gasha Seeds, and one Piece of Heart. During his quest, Link will have to buy a Magic Potion here to cure the King Zora's illness.

In The Minish Cap, Syrup the Witch's Hut is located in the northeastern section of the Minish Woods. Link must buy a Wake-Up Mushroom from the hut for 60 Rupees and use it to wake up Rem in order to receive the Pegasus Boots. Syrup also sells Blue Potion for the same amount of Rupees.

The Witch's House is the home of the Witch and her granddaughter Irene. Inside, Link can either buy Potions or sell spoils. In exchange for spoils and Rupees, the Witch can brew Blue, Yellow and Purple Potions. The Red Potion can be bought for only 50 Rupees. By talking to the Witch, Link can receive a free sample of the Red Potion, instantly recovering 8 Hearts.