Not to be confused with Syrup. For other uses, see Witch (Disambiguation). 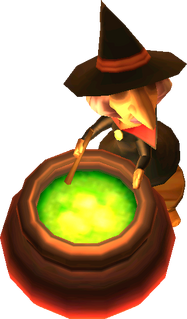 The Witch,[2] also known as Mapes in Lorule,[3] is a character in A Link Between Worlds.

The Witch is the grandmother and teacher of Irene. She operates the Witch's House near Zora's Domain, where she sells various Potions in exchange for ingredients,[4] though she can sell Link a Red Potion for 50 Rupees without ingredients. If Link speaks to her and tells her he is simply saying "hello," the Witch will give the young hero a taste of her Potion, which restores 8 Hearts.

After Link obtains all three Pendants of Virtue, Irene goes missing. If Link visits the Witch's shop, she will tell the young hero that Irene was attacked by Yuga and transformed into a Painting.[5] She tells Link that she keeps herself busy to prevent herself from worrying too much about her granddaughter.[6] When Irene is rescued, the Witch thanks Link and says she is forever indebted to the young hero.[7]

The Witch had a crush on the Fortune-Teller, and had once brewed him a Potion when he was sick, and had left it in his mailbox out of shyness. Her heart however was broken when he told her during a reading that the man she fancies does not return her affections.[1]

The Witch's Lorulean counterpart is given the name Mapes. She can be found north of the Lorulean Blacksmith's house within the Fortune-Teller's tent. She differs from Hyrule's Witch in that she wears a red mask, implying that she may be a Masked Follower. She brags to Link about and appears to be obsessed with her lover, the Fortune-Teller,[8] indicating that unlike her Hyrulean counterpart, she managed to form a significant relationship with him. The Fortune-Teller affectionately calls her "Mapes".[3] Because of her relationship, she considers herself the most fortunate witch around.[9]

Mapes tells Link that her fortune said that she will have good luck if she makes Purple Potion, but she admits her reluctance because of the ingredients found in the Potion.[10] Similarly to the Blacksmith's Wife with Gulley, the Lorulean Witch has no knowledge of Irene.[11]