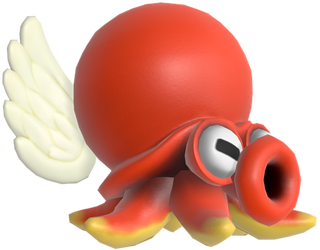 Winged Octoroks possess small wings they use for limited flight. They are land-dwelling creatures that spit rocks from their snouts. When Link attempts to swipe at them with the Sword, they take flight into the air to evade his attack and land behind him, after which they will retaliate by shooting a rock into him. To defeat them, Link can aim his strike to hit them as they land. Link can also use the Roc's Feather to jump high and slash his Sword in their direction. They are also susceptible to Spin Attacks and thrusts, as well as the Magic Rod and Boomerang. They can be found in the Ukuku Prairie.