This article is about weapon from the Hyrule Warriors series. For the item from The Adventure of Link, see Boots.

Their design is apparently based off the Iron Boots from Ocarina of Time, with the addition of feathers resembling the Golden Feathers from The Wind Waker.

They share the name Winged Boots with the Boots from Zelda II (which are sometimes referred to as the Winged Boots, such as in Nintendo's NES Game Atlas). 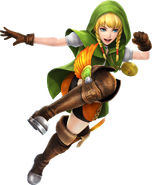 Promotional Render of Linkle wearing the Winged Boots from Hyrule Warriors and Hyrule Warriors Legends
Add a photo to this gallery
Retrieved from "https://zelda.fandom.com/wiki/Winged_Boots?oldid=542478"
Community content is available under CC-BY-SA unless otherwise noted.