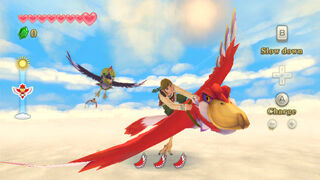 Annually
The Wing Ceremony,[1] colloquially known as the Ceremony and the Race among the residents of Skyloft,[2][3][4] is an annual event held on Skyloft for students enrolled in the Knight Academy that consists of a Race and a formal Ceremony with the participants reenacting the roles of the Goddess Hylia and her Chosen Hero. In the competition, the participants must mount their Loftwings and chase after a golden bird carrying a Bird Statuette.[5][6] The one who claims the statue first will be declared the champion and as a prize will advance to the next class level at the academy and will take part in the Ceremony playing the part of the Goddess's Hero.

The Race begins in the morning when the Knight Academy's Wing Ceremony will take place. Zelda was chosen to play the role of the Goddess Hylia and the winner will take part in the Ceremony with her.[7][8] As Link, Groose, Cawlin and Strich prepare to begin, Gaepora will warn Groose to play fairly, as he is known for being a bully.[9][10] When the event begins, the participants will dive off the pier and call their Loftwings.[11] After some maneuvering and occasional charging, Link will be able to approach the golden bird. Members of Groose's gang will push him away from it and begin throwing eggs so that Groose, their leader, can win instead.[12][13]

With some skill, Link can come near the bird a second time and claim the Bird Statue. If he gets it, he'll wave it around, eagerly waiting to show it to Zelda.[6] Following this, Zelda will suddenly shout at Link and jump off the pier. Link worriedly rushes to catch her, and does so successfully without injury.[14] She will congratulate him on his performance and urge him to move on to the Ceremony.[15]