Zelda Wiki
Register
Don't have an account?
Sign In
Advertisement
in: Hyrule Warriors: Age of Calamity Pages with Invalid or Missing Terms, Ganon, Bosses,
and 2 more 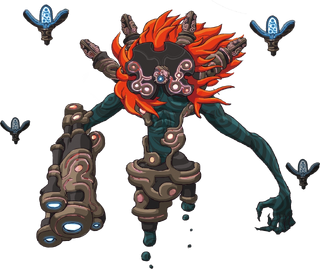 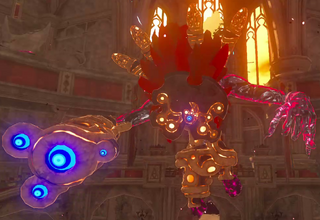 Windblight Ganon is a recurring Boss in The Legend of Zelda series.[3][name reference needed]

Link requires protection from the cold to resist the cold damage during his fight against Windblight Ganon. The battle, taking place atop Divine Beast Vah Medoh, has two main phases. During the first phase, Windblight Ganon will fly and teleport around the area, firing powerful blue energy blasts at Link; Revali warns Link that these attacks are incredibly accurate.[6] It will also fire large tornadoes at Link.

Once Windblight Ganon's hit points have been depleted by half, the second phase of the battle begins. During this phase, Windblight Ganon sends four small objects into the air; these objects are charge one another with blue electricity and fire it at Link. To temporarily disable Windblight Ganon, Link must shoot these objects while they float in the air. If Link hits Windblight Ganon with enough Arrows in quick succession, it will fall to the ground and become vulnerable to other attacks.

Windblight Ganon has 800 hit points in total, and explodes when defeated. When it is defeated, Link is rewarded with a Heart Container.

Windblight Ganon appears in Hyrule Warriors: Age of Calamity, filling roughly the same role it did in Breath of the Wild. Unlike its appearance in Breath of the Wild, it now bears a second, larger hand cannon replacing its left hand, and it now has four tubes of Malice connecting its arms to its back. It also sports purple glyphs, signifying its elemental affinity with wind, and has a red eye instead of a blue one.

Later, when the heroes lay siege to Hyrule Castle, Windblight Ganon is summoned one final time, along with the other Blight Ganons, to defend Hyrule Castle; however, it is defeated by the heroic forces.