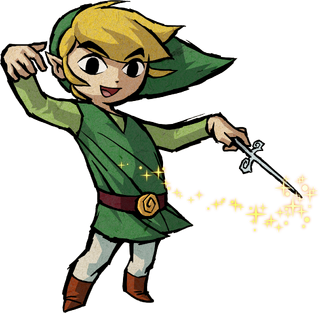 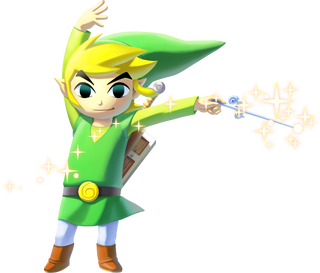 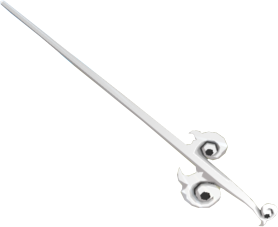 Ocarina of Time
The Wind Waker is a recurring Item in The Legend of Zelda series.[1]

The Wind Waker is a magical conductor's baton that is given to Link by the King of Red Lions when he reaches Dragon Roost Island. Long ago, it was used by the King of Hyrule to conduct the Sages when they played their song to call upon the gods.[2]

The Wind Waker is said to have the power to change the direction of the wind, as well as being able to call upon and borrow the power of the gods.[3] Link uses this to move around the Great Sea with much ease in The Wind Waker. It also has the power to open doors to ancient temples, awaken the sage within someone, allow him to travel in cyclones, take control of others and more.

According to an interview with Eiji Aonuma in the documentary Zelda no Video, the idea that eventually evolved into the Wind Waker initially started off as a theremin-like device.[4]

There is a total of six Wind Waker songs that can be learned throughout the course of the game.

By moving the Control Stick, songs can be conducted in 3/4, 4/4, or 6/4 time, with each time signature having two separate songs. The C-Stick is then used to play one of five notes: up, down, left, right, and center. Both the timbre and the pace of the played music vary according to the time, and each song can only be played while conducting in the appropiate time.

Playing a song without moving the Control Stick to the left or right will allow songs to be played in 3/4 time.

Songs are played in 4/4 time by holding the control stick to the left while playing the song.

6/4 time is activated by holding the control stick to the right while playing.

In Hyrule Warriors, the Wind Waker appears as one of Zelda's weapon types. The weapon type is simply called Baton, however, the Wind Waker itself appears as its lowest tier. By using the Baton, Zelda is capable of attacking with gusts of wind, tornadoes, and lightning strikes. It is also capable of creating music and attacking enemies with the soundwaves generated. When performing her two strongest attacks, the "Song of Storms" and "Saria's Song" will play. The "Earth God's Lyric" and "Wind's Requiem" are also part of the move set.