This article is about the item. For the game, see The Legend of Zelda: The Wind Waker. For the "Waker of the Winds", see Link.

Invoking the power of songs

"This is the Wind Waker! It is a baton of sorts that was used long ago when the people played music in prayer to the gods. In those days, simply using it allowed one to borrow the power of the gods, but I do not know if it still works. Even so, I thought it might be of some use to you. Perhaps you should try using it."
— King of Red Lions

The Wind Waker (風のタクト, Kaze no Takuto?, Baton of Wind) is an item from The Legend of Zelda: The Wind Waker. It is a conductor's baton that Link uses to invoke several powers of nature by conducting disembodied voices. Fado tells Link that it was once used by the King of Hyrule to conduct the sages. Link is given the Wind Waker by the King of Red Lions when he first arrives on Dragon Roost Island. With it, Link can learn a total of six songs, and he can conduct in three different time signatures: 4/4, 3/4 or 6/4. Link can learn two songs in each signature.

The Wind Waker is used by applying it to one of the X, Y, or Z buttons. Then, the main analog stick can be moved from left to right to change the meter and from top to bottom to adjust the volume from louder to quieter, respectively. The C stick is used to conduct specific notes. The Wind Waker's range is C4-A5.

Below is a table of the note translations to actual pitches in relation to each C-Stick position in each meter.

The analog stick can also be moved up and down, or diagonally in 4/4 or 6/4 time, to change the volume of the notes. However, this is likely an abandoned mechanic, as it does not have any effect on the final conducted tune.

In Hyrule Warriors, the Wind Waker is one of the weapons in Zelda's Baton moveset and is her default Level 1 Baton. While her sword is a fast weapon designed to cut through enemies straight ahead, the batons are better for crowd control. Zelda can knock back groups of enemies surrounding her and create cyclones that push mobs away. Zelda can use it to produce wind and lightning attacks. When using the Wind Waker or other Batons while running, Zelda will use the baton's power over the wind to levitate slightly off the ground, increasing her mobility. Using the special attack while equipped with the Wind Waker or other Batons will play a rendition of "Earth God's Lyric" or the "Song of Time".

The Wind Waker appears as one of the Item Cards used in the Great Sea Adventure Mode map to remove wind barriers from the Adventure Map.

During Toon Link's idle animation, he will briefly pull out the Wind Waker and conduct with it. Since it is an idle animation it has no effect. 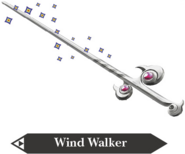 Retrieved from "https://zelda.fandom.com/wiki/Wind_Waker?oldid=496096"
Community content is available under CC-BY-SA unless otherwise noted.