For the temple in Phantom Hourglass with a similar name, see Temple of Wind. 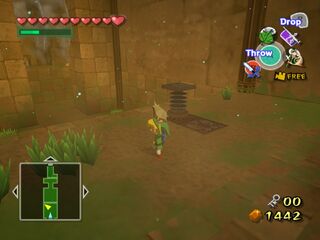 Wind Temple guide
at StrategyWiki
The Wind Temple is a recurring Dungeon and Stage in The Legend of Zelda series.[1][name reference needed]

The Earth Temple and the Wind Temple were built in order to protect the Master Sword's power to repel evil, by means of providing a place for the two Sages to conduct their prayers to the Golden Goddesses.[2] The prayer song for the Sage of Wind was the Wind God's Aria. When Ganondorf escaped to the surface of the ocean, he sought to remove the power to repel evil from the Blade of Evil’s Bane. In turn, he invaded the Wind Temple and killed the Sage of Wind, the Kokiri known as Fado.[3][4] It was here that Fado's spirit lingered on, awaiting the time when a new Hero bearing the Master Sword would come with a successor Sage to destroy the evil that now haunted the temple.

Link came with Fado's successor, the Korok known as Makar, who bore a violin identical to Fado's.[5][6] Together, Link and Makar play the Wind God's Aria to destroy the Stone Tablet that blocks the entrance to the Wind Temple.

However, Makar is abducted by Floormasters within the temple, but he is eventually rescued by Link when he discovers the Hookshot after defeating a Wizzrobe within the temple’s depths, using it (alongside his Iron Boots) to free Makar from his cell. The pair then continues on through the vast chambers of the temple until they finally discover the deepest chamber, the chamber of the Sage shrine. Link enters the chamber and confronts Molgera, using the Hookshot and the Master Sword to damage the great sandworm’s weak spot: its tongue. After dealing Molgera its deathblow, Makar enters the shrine and plays the Wind God's Aria while Link conducts with the Wind Waker, causing Fado’s spirit to reappear one final time and play along with them. This action restores the Master Sword to its full power and finally frees Fado of his obligations, allowing him to finally rest in peace.[7] Makar remains within the temple shrine and sends Link back above ground, now armed with a fully-powered Master Sword, to confront Ganondorf.

The Wind Temple appears to be a forest-themed dungeon in addition to its wind-related theme. Makar, the Sage of Wind, is himself a forest-dwelling creature (as was his predecessor, Fado), and his planting of small trees throughout the temple only adds to the forest-related atmosphere of the temple. The dungeon is filled with various traps (Spike Traps amongst them) and wind-related puzzles. The dungeon's primary chamber is a long, cylindrical shaft several stories tall that extends deep down into the temple's depths and has small sections that branch off the main shaft, at the bottom of which is a large propelling fan that periodically turns on and off after being reactivated.

Link makes constant use of several tools within this temple, primarily the Hookshot, the Iron Boots, and the Deku Leaf. As Link and Makar make their way through the temple, they will encounter several Stone Tablets similar to the one encountered at the entrance, which can only be destroyed when the young duo play together the Wind God's Aria. The Command Melody is also heavily used in this dungeon to take control of Makar, who can reach some locations that Link himself would otherwise find difficult to reach. While controlling Makar, the Korok can plant trees in certain spots that will allow Link to hookshot to them and thus allow him to reach otherwise inaccessible areas. Within the dungeon, Link must face a Wizzrobe as a mini-boss in order to claim the dungeon's treasure, the Hookshot. Meanwhile, in the deepest recesses of the temple's depths, Link must face the great sandworm Molgera as the temple's boss, a battle which requires extensive use of the Hookshot in order to exploit Molgera's vulnerable tongue.