Zelda Wiki
Register
Don't have an account?
Sign In
Advertisement
in: Ruins, Locations, Locations in The Minish Cap 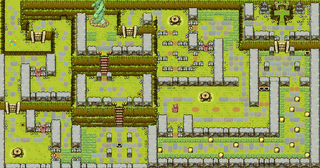 Castor Wilds
Fortress of Winds
The Wind Ruins are an area in The Minish Cap.[1]

The Wind Ruins are located in southwestern Hyrule. They connect to one other area: Castor Wilds to the north.

The Wind Ruins are the remains of the dwellings where the Wind Tribe lived before they moved to the Cloud Tops. The Ruins house the Fortress of Winds, where the Tribe once kept the Wind Element.

Directly near the entrance to the Wind Ruins lies a wall that can be destroyed with a Bomb; it conceals a cave with a Chest containing a Kinstone Piece. Scattered throughout the Wind Ruins are Armos, which were once used to protect the humans who lived there.[2] Many of the Armos are inactive and must be turned back on. A nearby Minish tells Link that the statues were constructed by the Minish and that their interiors contain a switch which can activate or deactivate them,[3] allowing them to be destroyed. Inside the Minish's home rests a Chest, which contains another Kinstone Piece. There are three Minish Portals in the form of tree trunks that allow Link to access various parts of the Wind Ruins.

Scattered throughout the Wind Ruins are several stone effigies that impede Link's path. They disappear once all of the nearby enemies have been defeated. Throughout the cliffsides of the Wind Ruins, there are several thin vines, which Link can climb while Minish-sized. One of the vines leads to a small cave, housing a Piece of Heart. Also found within the Wind Ruins is a planted seed, which will grow into a beanstalk when Link Fuses Kinstone Pieces with the proper individual.

One Armos will react instantly to Link's presence and move south to impede his path. In order to bypass this statue, Link must become Minish-sized and deactivate it from within. The three other Armos in the vicinity will cause two stone effigies blocking two Chests to disappear. The two Chests contain 50 Rupees and 50 Mysterious Shells, respectively.

After Link completes the Fortress of Winds, he and Ezlo are teleported outside to the Wind Ruins. There, Ezlo concludes that the Wind Tribe has since abandoned the Ruins and taken the Wind Element with them before pressing Link to search for the Water Element instead.[4][5]

Ruins in The Legend of Zelda series
Community content is available under GNU Free Documentation License unless otherwise noted.
Advertisement