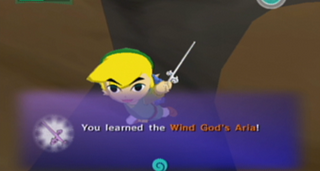 "Earth God's Lyric"
The "Wind God's Aria" is a song featured in The Wind Waker.[1]

It is learned from a Stone Tablet inside the cave of Gale Isle. Upon learning this melody, the Kokiri sage known as Fado makes an appearance in front of Link. Fado was the Sage of Wind until Ganondorf's magic destroyed him inside the Wind Temple.[2] His spirit remained in the hopes that the new Sage of Wind could be awakened.

The "Wind God's Aria" must be played in front of Makar in order to awaken him as the new Sage of Wind.[3][4] Makar, with the help of Link, plays this song on his violin to open the entrance to the Wind Temple.

This melody must be played numerous times inside the Wind Temple in order to break down several Stone Tablets and thus be able to progress through the dungeon. After defeating Molgera, Link conducts the Wind God's Aria for Makar and Fado so that the power to repel evil is fully restored to the Master Sword.

Sheet music for this song